Baroncini, on Linn St. in downtown Iowa City, has always been known for its upscale Italian fare and superior wine list, which is maybe why I always thought of it as a date spot or the locale of a celebratory meal, the kind of splurge meal where you order appetizers and drinks and get an espresso with dessert — that kind of place. But word has been circling around town that they offer a menu fisso (fixed-price menu) with ten different lunch options, soup or salad and fresh baked bread for ten dollars. I mean, I had no choice but to stop in and scope out the situation.

Though I’d walked by many times, this was my first time inside and the space was inviting — there were plants in the windows, they were playing Verdi, there was a framed picture of Marcello Mastroianni. I sat down and looked over the aforementioned lunch menu. 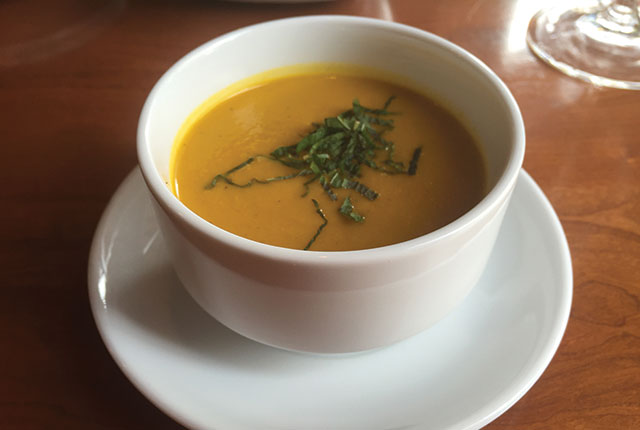 It’s starting to get chilly out, so the soup seemed appropriate. I had my choice between the house minestrone and the rotating soup, which turned out to be a carrot mint soup, so I went for that. The ten different lunch entree options featured plenty of pollo and Bolognese dishes, but as a vegetarian it was between the bigoli con marinara (a thick spaghetti-like noodle in tomato sauce) and the ravioli con melanzane e mozzarella (eggplant ravioli in red sauce). Even though the bigoli seemed like a good straight-forward barometer, one of the other diners leaned over and endorsed the eggplant ravioli — she said it was her favorite. I ordered the ravioli.

The bread was fresh out of the oven and they brought olive oil for dipping, so between the hot focaccia and soup it was all pretty comforting. The soup had a little citrus kick, and the texture was spot-on; I really liked it.

The ravioli arrived and, as is form in many an Italian restaurant, they offered fresh cracked pepper and grated parmesan. The six good-sized raviolis were stuffed with a mixture of roasted eggplant, garlic and mozzarella cheese, and cooked perfectly al dente. The red sauce was tangy and flavorful. I’m not totally a ravioli lover, but this really won me over.

The price was right, there were a broad number of menu options and everything seemed to be cooked with care and tasted good. I’ll for sure be adding Baroncini to my list of go-to lunch spots during the week.

This article was originally published in Little Village issue 206.