Paulina Mena: “Honey & Mass Extinction: What every Iowan should know about the state’s bee population”

Deep in the belly of the Vermeer Science Center at Central College in Pella, Iowa, cardboard boxes are stacked against the wall in a dimly lit laboratory. The boxes contain thousands of bees — carefully preserved and meticulously categorized based on their Latin genus and species — each with a unique tale to tell. Some are as small as a gnat; others are the size of a cockroach. Their colors span the spectrum, too, from rich, reflective blues to the familiar striped yellow and black of the common honey bee. Paulina Mena, an associate professor of biology, is their veritable warden.

Mena has been studying bees for over a decade, an obsession which stems from her undergraduate experiences at Universidad Catolica de Valparaiso, Chile.

“I did my undergraduate degree in Chile, and decided to do bee stuff because Chile is a hot spot for bees. Bees like deserts; that is where they have diversified a bunch,” Mena said. “Because of that, we had a bee biologist in my department, and I did work with him as an undergrad.”

Chile has “significantly more than 436 species of bees” according to a study published in the journal Genome, which used DNA barcoding to estimate the number of bee species in Chile. At the time of that publication, 436 species were known to exist based on documentation, but the authors found DNA evidence that suggests a great deal more exist in the country.

After finishing her undergraduate degree, Mena moved to Iowa in order to complete a Ph.D. in genetics and chromosome architecture at the University of Iowa.

Today, Mena works with students every summer to collect, tally and document the roughly 400 different species of bees in Iowa. Working out of Central College’s field station and small, remaining prairies in nearby towns, Mena and her students assemble brightly painted traps in each hectare of prairie and, based on the number of bees that fall into each, calculate an estimate of each species’ numbers. Mena says that bee populations appear to be dwindling, particularly those species found in Iowa’s native tallgrass prairie environments, though research on the issue is scarce.

“The main problem that we have now is really habitat fragmentation. It’s really shocking what we’ve done to the native environment and the tallgrass prairie,” she said.

“The foundation of biology is genetic diversity, the genes that nature has to work with,” she said. “The key is that the more diversity within a species, the greater the chance that species has of coping with environmental changes. When you have isolated populations, diversity decreases, and any number of things could then lead to extinction.”

Significantly, many endangered and declining bee species are crucial for the agricultural industry. According to the Yale School of Forestry and Environmental Studies, a third of the world’s food supply relies on bee pollination. Corn and soybeans, Iowa’s predominant crops, are wind-pollinated and do not require bees to grow, but cross-pollination and the presence of bees does increase their yields, Mena said. Many other crops, from blueberries to almonds to strawberries, absolutely rely on bees.

“But even if it’s not important for the main crops here, we still eat a lot of things besides corn and beans. Without bees, our health would suffer because there are a lot of nutrients that are only in plants pollinated by bees.”

While common honey bees pollinate many important crops, they are not nearly as gifted at the task as their less well-known relatives. The green sweats, for instance, can perform buzz pollination, which means that they detach their back muscles from their wings and vibrate them at a frequency matched to that of the flower, causing the pollen inside to be released into the air. Other species, like the masked bees, are as small as 0.14 inches, with black and yellow or white markings on their face. These tiny insects eerily resemble small hornets and, like the honey bee, are generalist pollinators. A miniature torso, however, enables masked bees to enter flowers with pinhole-sized openings to harvest the pollen inside.

To Mena, it seems likely that these atypical bee species are suffering the same tragic fate as their bumble and honey bee counterparts. While we do not know precisely how quickly they are dying off, it seems certain that habitat destruction and pesticide use are the leading culprits.

Back-to-back studies published in Science by researchers at the Natural Environment Research Council and the Department of Biology at York University in the United Kingdom both show frightening implications for a commonly-utilized class of pesticides called neonicotinoids. The vast majority of seeds sown by farmers today are coated with this pesticide. When the seed sprouts, the entire plant becomes covered in the chemical, including its pollen.

The researchers of the York study, which focused on the use of neonicotinoids on corn crops, demonstrate that exposure to natural concentrations of the pesticide for four months, the majority of the bees’ active season, killed both worker bees and queen bees over time. When neonicotinoids were used in conjunction with fungicides, the bee populations died off even more rapidly — the neonicotinoids became twice as toxic.

The other study focused on honey bee and wild bee populations in Hungary, Germany and the U.K. and, instead of corn, the researchers followed large-field experiments of oilseed rape plants grown with or without neonicotinoid-treated seed coatings. In Hungary, honey bees exposed to the treated plants had a 24 percent decline in population the following spring. Wild bees exposed to the neonicotinoids also had a loss in reproductive capabilities, indicating that the pesticide caused a reduced capacity of bee species to sustain their population after exposure.

Neonicotinoids are neurotoxins which have profound and poorly understood effects on the brains of native bees. Europe passed a temporary ban on the use of neonicotinoids in 2013 and is considering making the ban permanent, but the chemicals are still used in the U.S.

“Doses are sublethal to the bees, but it messes with them and affects their immune system, which makes them vulnerable to other things, such as mites or parasites and viruses,” Mena said. “This is definitely happening with the bumble bees, but we also think it is affecting native bees, though very few have been studied.”

While the diminished bee populations are a serious concern, Mena says that just about anyone can make a difference in their chance for survival. Dandelions and an unkempt lawn are good for bees, as are plants with bright flowers. Avoid using weed killers and grow native prairie plants, including mint, black-eyed susans and sunflowers.

Most bees are solitary, not social.

Most bees nest on the ground, but some make their own holes in wood (carpenters) or use existing holes (leaf-cutter and mason bees). 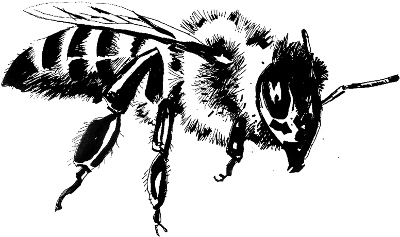 Honey bees are not native to North America. The honey bees that we know today were brought over by European settlers. 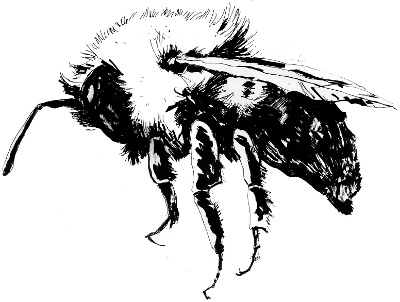 Bumble bees form small, annual colonies (a new queen makes a new nest every year). One of the most common, Bombus impatience, or the common eastern bumble bee, is native to the area, and populations seem to be thriving. The insect is widely used in greenhouse pollination, even outside of its natural range. They are relatively easy to breed and are commercially available. 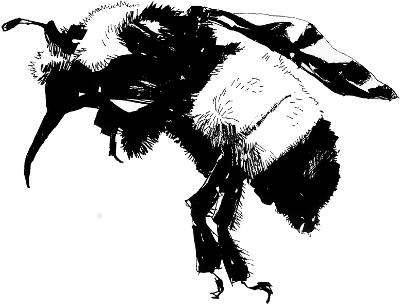 Populations of Bombus pensylvanicus, or the American bumble bee, have started to decline, with a dramatic reduction in its historical range. The causes of the decline are unknown, but it is believed to be a combination of factors such as habitat fragmentation, negative effects of pesticides and parasites and pathogens. 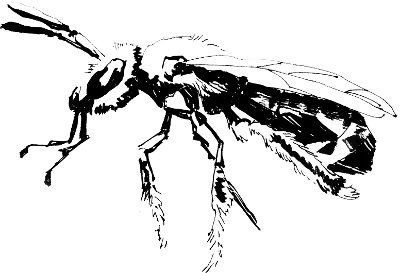 These green, metallic bees, including the Augochlora pura in Iowa, are solitary and often build nests under tree bark in rotting logs. These bees can perform buzz pollination, vibrating at the right frequency to release pollen from flowers that carry pollen inside their anthers, including crops such as tomatoes and potatoes. 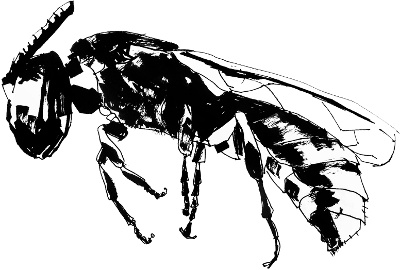 Belonging to the genus Hylaeus, these tiny insects, including some as small as 0.14 inches, are black with yellow or white markings on their face. They are from the most ancestral family of bees, which means they are more wasp-like. Members of this tiny species eerily resemble small hornets and lack pollen-collecting structures, called scopa, opting instead to carry the pollen in their “honey stomach.”

Only females (of most species) can sting, because the stinger is a modified structure to lay eggs. Only the honey bee has a barbed stinger, which they lose when they sting. Most species can sting multiple times without dying.

Nicholas McCarty is a master’s student at Imperial College in London and an enthusiast for winged insects that help create delicious foods. Follow him @NikoMcCarty. This article was originally published in Little Village issue 228.