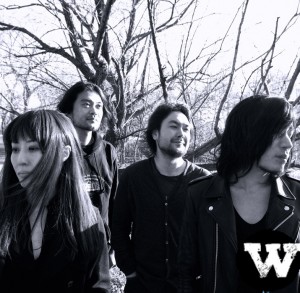 Iowa City has plenty to offer this weekend, but we’ll get to that in a minute. As it turns out, some of our neighbors have pretty exciting things happening too. This is why I deem it necessary to implement an urgent…

The Maximum Ames Festival is in it’s second year and their lineup once again does not disappoint. Of the 130+ bands performing over the course of four days are: Jeff Mangum, Wanda Jackson, Dirty Dozen Brass Band, Mount Eerie, The Daredevil Christopher Wright and so many more. Like Iowa City’s Mission Creek Festival, Maximum Ames will hold their performances and a number of different venues throughout the city of Ames.

There seems to be a “World Music festival” scene in America. There are certainly quite a few, though the Landfall Festival in Cedar Rapids has done a particularly superb job this year. Some of the most prominent acts to come out of countries like China, Brazil, Mali and Tunisia are on the lineup. Over 50 acts from 10 different countries are scheduled to perform at a variety of venues in Cedar Rapids. Some highlights are: Hanggai, Terakaft, Deolinda, Movits!, Rana Santacruz and Trio Brasileiro. A more extensive Little Village article on the festival can be found here.

Freedom For Birth is a documentary put out by an organization called “One World Birth.” The organization is part of a new movement to encourage changes in policies and practices regarding the process of childbirth. The aim is to spread these messages largely through film and the internet. The film is presented here by the University of Iowa Center for Human Rights and the Women’s Resources and Action Center. More background information:

Hospitals in the United States were the only facilities in the world that did not invite practicing midwives, the traditional care providers, to help train obstetricians a century ago when women began birthing away from home. Statistics now show a staggering outcome, maternal and neonatal mortality rates place the United States 37th in death rates in childbirth. One in three American babies today are born surgically which often results in mother-baby separation at birth and physical and mental health complications for both. We think that having the most advanced health care technology on Earth means we have the best maternity care as well. The reality is very different and getting worse.

Research shows that inductions lead to cesarean deliveries and pharmaceutic interventions necessitate further interventions that interrupt that normal progression of birth. Healthy outcomes have not improved since the implementation of constant electronic fetal monitoring. Seems nothing replaces the human attention, constant encouragement and simple comfort measures that traditional midwives have offered since long before statistics have been kept. Obstetricians are amazing technicians when surgery is needed but most are not trained to assist women in natural birth that occurs on the woman’s terms.

The Iowa City cinema advocates at FilmScene are presenting their second in a series of outdoor films at “Starlite Cinema” in City Park this season. If anyone has presented you with a TPS report downtown this week, you have FilmScene to thank. Last time it was Blues Brothers, and this weekend it’s another cult classic. Office Space will be projected in high definition with 5.1 audio; in other words, this isn’t going to be some makeshift screening, but a real cinematic experience. Your $5 ticket gets you into the movie, live pre-show music and free popcorn. Also available will be candy, pizza from The Wedge, and a drink menu including soda, wine and Schafly beer on tap. FilmScene co-founder, Andrew Sherburne says, “Starlite is a one-of-a-kind moviegoing experience, and we’re proud to bring it to Iowa City. It’s the pure joy of the drive-in with a fun, grown-up twist.” All proceeds from the Starlite shows go to FilmScene’s goal of opening a full time cinema in downtown Iowa City.

Brighton MA have become a familiar name around these parts over the past few years. The Chicago-based indie rock band has made frequent stops in Iowa City as they build their fan base as a national act. Their most recent album, Oh Lost was produced by Brian Deck (Iron & Wine, Modest Mouse) and exhibits a band with a clearer focus and drive. Having taken a whole month for studio time, the album is their most polished work to date. I’m apparently not the first to mention that front man Matt Kerstein sometimes has a Bob Dylan voice going on, and their overall style as a band has been compared to The Walkmen and The Flaming Lips. They’ve shared the stage with Arcade Fire, Spoon and the Old 97’s. Their music has been featured on TV shows “Community”, “Gossip Girl”, and “One Tree Hill.” Local act, Bermuda Report open up.

The band responsible for extending the column this week is coming in all the way from Tokyo. MONO is an established post-rock staple. The four piece band hit the ground running with their formation in 2000. Within two years of deciding to make a band, they were touring extensively in the United States and Europe. They’re a strictly instrumental act; each track is long and builds into something heavy and powerful, often with the help of orchestral sounds. Fans of Explosions in the Sky will not be disappointed. Opening the show will be New York City rocker, Chris Brokaw. Brokaw is known for his work in the late 90’s/early 00’s with the bands, Come and Codeine. He has made many influential friends in the no wave and slowcore scenes in New York; he has accompanied artists such as Thurston Moore, Thalia Zedek and Mission Creek alum, Rhys Chatham. Alex Body kicks the evening off.

As some of you may already know, our print edition of Little Village has gone from publishing monthly to biweekly. This generally means more content, more frequently. As the articles from the print version also end up on the website, it might be helpful to post those links to those here, at the end of the Weekender column. It could be a good way to keep up with events outside of this Thursday – Saturday time frame, and stay in touch with other content that you may not normally see here (news, health, entertainment, prose, reviews of beer, albums, food, film, etc.). Scroll down and give it a try.

Your Town Now
The Iowa City government is moving toward restrictions on payday lenders and a plan to focus school district spending, once again, outside Iowa City proper. We discuss the merits of both actions and their potential impact on the city.

Townie Hawk
Where should you watch this week’s game? Townie Hawk gives you her expert picks.

Crafty
September’s Crafty column gives readers a step-by-step tutorial on how to make yogurt at home in your slow cooker.

Pro Tips
Wayne Diamante answers your q’s and helps you on your way to better living.

Prairie Pop
“MP3: The Meaning of a Format” discusses the radical, nearly-universal ways that music is changed, not in studios, but in labs.

ARTicle
David Dunlap opens his home to artists, converting his acreage into one of Iowa City’s most fabulous happenings, always in process.

On the Beat
There are a bunch of new faces around town, so shouldn’t you invite one of them out to a show?