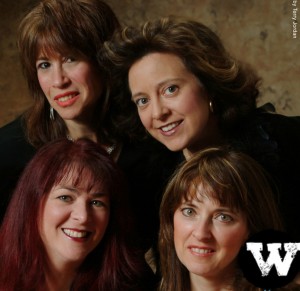 Hello dear Weekender readers. A new weekend is once again upon us. Pull out your planners. Mark your calendars. Tell Siri to remind you about the following:

True West follows the story of two bitterly estranged brothers who find themselves having to write a screenplay together. Austin, the younger of the two, is a professional screenwriter while his older brother, Lee is a drifter and a thief. There is comical tension between their two personalities. Through their back and forth banter they learn about each other and discover their mutual strengths. True West is one of many screenplays written by American playwright, Sam Shepard. Shepard’s plays tend to tell tales of American life and culture. Riverside Theatre founder, Ron Clark directs the performance. Clark has directed numerous plays for the Riverside, as well as in theaters across the country.

Four Bitchin’ Babes are, as you might infer from their name, four lady musicians and songwriters. Formed in 1990, the “Babes” have a rotating cast of members. The songs are lighthearted, folky, humorous and often involve themes around being a lady. Each member has a family and this often comes through in their songwriting as well. They have released nine proper albums in their career as a band, one of which with the help of Celine Dion producer, Jeff Bova.

Actual Wolf is the solo project of Eric Pollard. The band that he drums for, Retribution Gospel Choir was in town not too long ago and Pollard is back with a much more quiet and intimate act. It turns out he’s quite the proficient singer/songwriter on his own. Residing in Duluth, MN, Actual Wolf has released one EP so far, but another has a release date scheduled for this month. The new EP features a full band. I would imagine he would have copies at the show, as it’s already available on the Bandcamp page. The new songs are polished and reflect a project that has found its stride. Local opener Colloquialisms is the project of Joe McNertney who released a full length album a year ago and has an excellent Little Village Live recording.


See you next week!