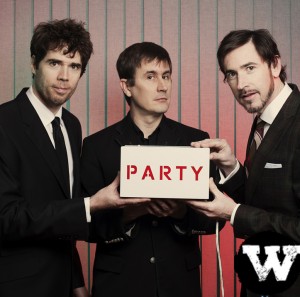 Hello and welcome to the “HalloWeekender!” If you’re planning on getting down in the name of Halloween, this is the weekend to do it. Over the next few days, I’m predicting that I’ll see 7 college aged Waldos, and crossing my fingers for at least two “Gangnam Style” guys. Is it weird that I can’t stop watching that video? Alright, back to the action. Here’s the Halloween weekend haps:

Two years ago, award winning author, Justin Cronin published his novel, The Passage which was met with overwhelming popularity. It was one of Time Magazine’s Ten Best novels of 2010, sat on the New York Times Bestsellers list for 7 weeks and received countless other awards and praise. The former Iowa Citian will read from his most recent novel, The Twelve. The Twelve is a sequel to The Passage, and second in what will eventually be a trilogy. In the video below, Cronin discusses the novel and some of the anxieties around writing for both horror junkies and sci-fi nerds.

With their latest studio album, Transcendental Youth hot off the presses, The Mountain Goats hit the road and will take the stage at the Blue Moose on Friday. Front man John Darnielle is the creative force behind the band, and has released consistently exceptional records for over a decade. The project was born out of lo-fi tape recordings in the 90’s, but for the last 10 years it has become a more polished studio effort. They consistently release about one album per year, all of which are given high praise by critics and fans alike. His lyrics/knack for storytelling have almost always been the backbone of the project. The songs often tell tales about love, life and religion, and Darnielle delivers with an honest urgency. There is a spell that is cast over anyone attending a Mountain Goats show. The passion and electricity of the live performance is so darn captivating and it’s hard to look away. Matthew E. White opens. It is no secret that White’s biggest influence is Randy Newman, and his latest concept album, Big Inner is definitely worth a listen.

After weeks of planning and labor, the Rockin’ Haunted House show is finally upon us. As the name suggests, it’s a haunted house and a rock show combined. The “Haunted Hall” will be constructed by local special effects guru, Corbin Booth, and there will be an extravagant stage built specifically for this show. The musical lineup includes HOTT, Conetrauma, Lipstick Homicide (who recently opened a show for Green Day! What?!), Other Band and The Blendours. HOTT will also be hosting a “zombie wall of death.” I’m not exactly sure what that means, but I do know that fake swords and shields will be involved. So if you’re stuck on costume ideas, consider the zombie. The show is all ages and will benefit PS1 and United Action for Youth.

Here’s another festive Halloween weekend party. This isn’t just a dance party, nor is it just a show–it’s both and then some. Performing live will be two Iowa City projects, Cuticle and Goldendust. Cuticle is moniker of Brendan O’Keefe, and his unique 80’sesque synth-pop music has been released on labels, Not Not Fun and %100 Silk. Here’s what you can expect. Fellow local synth-based duo, Goldendust will also perform in support of their new Night-People release, which will be available for the first time at the show. A cast of established DJs will be spinning tunes as well, including Lady Espina, Carnap and Nemnock. In addition to the music, there will be an interactive video show and a merch table full of shirts, posters and other Halloween flavored swag headed by White Rabbit. Wear a costume and enter the costume contest. $1 to enter, winner takes all. Good luck!

World peace advocate and vegan enthusiast, Dr. Will Tuttle put himself on the map with the release of his book, The World Peace Diet. Tuttle takes his beliefs about veganism and healthy eating, and broadens the scope to include its importance in society on a global level. In addition to his writing, Tuttle is an established musician and public speaker.