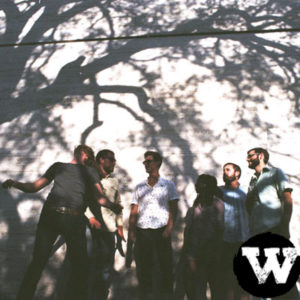 Welcome to another edition of the Weekender. It’s looking a little cold and wet out there at the moment, but we’re Iowans; we’re proud of our ability to tolerate anything the sky throws at us, right? Let’s take a look at what else the wind blows our way this weekend.

Named after a tiny town in West Texas, Balmorhea is an ambitious project that has grown to be one of the most interesting bands making instrumental music right now. On a surface level, you might call it post-rock. The Austin-based group’s sound moves between subtle minimalism and grand orchestral composition, but often using instrumentation that you wouldn’t expect out of a post-rock band. For instance, the first track, “Days” from the new record features a steel drum. The band appropriately cites Max Richter, Arvo Pärt and John Cage as major influences.

Spaceholder Festival grew out of Morgan’s fascination with archeology and the goal of translating her personal past into dance. She transformed memories like playing in a marching band and cutting meat into exhilarating artifacts of movement. Thorson’s fellow performers add their own stories, creating an explosive and meditative evening of dance. Shirey’s score provides a haunting backdrop, featuring everything from a miniature hand bell choir to a reconfigured music box and remixed classics from the Doobie Brothers and Led Zeppelin.

Thorson’s Spaceholder debut is part of a weeklong residency at CSPS supported in part by the National Performance Network (NPN) in New Orleans. She will also conduct master classes with dance students at the University of Iowa (Monday, Oct. 15 at 12:30 pm) and Coe College (Thursday, Oct. 18 at 12:30 pm).


Teaser of Morgan Thorson’s “Spaceholder Festival” from MANCC on Vimeo.

Rosanne Cash is one of America’s most famous singer songwriters. When your father is Johnny Cash, a knack for musical talent apparently tends to rub off. In her career, Cash has released 12 studio albums and been responsible for 11 chart topping singles. The mother of five certainly keeps busy. In addition to touring the country with her musical act, Cash is also an established writer. She has released a children’s book, a book of short stories, a memoir and other articles/essays for publications like The New York Times, Rolling Stone, Time Magazine, The Oxford American, and New York Magazine. Rosanne Cash will be joined by local favorite, Pieta Brown.

The Riverside Theatre debuted Sean Christopher Lewis’ original play, Manning Up last week, and the show continues this weekend. The plot revolves around two soon to be fathers, and their anxieties about fatherhood has their respective due dates near. Writer/director, Sean Christopher Lewis is the Artistic Director of Working Group Theatre here in Iowa City. More information about the play/showtimes here. More information about the director here.

Iowa City has been doing a good job of bringing in relatively big name hip hop shows to town. Brother Ali was here recently and this weekend we get Alabama rapper, Yelawolf. Yelawolf has worked alongside artists such as Big Boi, Big K.R.I.T., Kendrick Lamar and Diplo. His first studio album, Radioactive was released on Eminem’s label, Shady Records, and was met with positive critical acclaim. He is currently touring the country and working on his next release, Love Story.

24 Hour Comics Day began as a writing exercise for comic book authors, Scott McCloud and Steve Bissette. The idea was that they had to write a 24 page comic book over the course of 24 hours. The idea caught on and a holiday was created for people wishing to attempt this feat. The Iowa City Comics Creators Club will host its own 24 Hour Comics Day event, inviting writers, comic book enthusiasts and passersby alike to observe and participate in the celebration. It’s the third time they’ve held this event, and testimony from previous participants assures that things tend to get a little nuts as the clock winds down. Coffee, snacks and drawing supplies will be provided for those interested. Critical Hit is located at 702 S Gilbert in the Kennedy Plaza.

Amy Helm is another established songstress maintaining a strong musical family legacy. She is the daughter of legendary Levon Helm and Libby Titus Fagen. The multi-instrumentalist performs her own original tunes as well as standards in gospel and blues. She gained quite a bit of notoriety while performing in her father’s “Midnight Rambles,” which were a series of intimate performances at his home/studio in New York. The father/daughter dynamic won the hearts of audiences and gave the act a heightened energy. She co-produced her father’s album, Dirt Farmer in 2007–an album that went on to win a Grammy for Best Traditional Folk Album. By herself, she has released three studio albums and has shared the stage with the likes of Mavis Staples, Emmylou Harris, and Joan Osborne. She is also a founding member of the band Ollabelle.