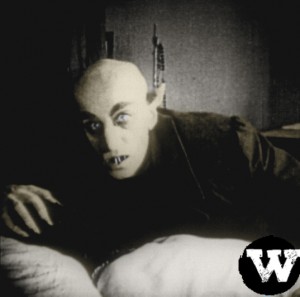 Welcome to this fresh edition of the Weekender. With the exception of Thursday night’s Alloy Orchestra show at the Englert, everything is local this week. With a couple of eerie film screenings and a new Samuel Locke Ward release called Double Nightmare, the season of spookiness is officially upon us. Hold on tight.

Alloy Orchestra was a project formed in 1990 with the goal of writing scores for old silent films. The “orchestra” consists of just three members. They use multiple instruments to create fresh musical accompaniment to films that might otherwise sink deeper into obscurity. They work very closely with the films and the archivists who restore them, and even change their compositions as better prints of the film at hand become available. On Thursday they will perform their score of F.W. Murnau’s classic vampire film, Nosferatu. Watch Alloy Orchestra’s Nosferatu trailer below.

Sam Locke Ward is one of Iowa City’s most established performers. Sometimes he’s by himself with nothing but a guitar and sometimes he has a thrash metal band behind him. He’s been in more projects than I can think of and is constantly churning out quality music. His most recent project is a massive two hour long, two disc release entitled Double Nightmare. Locke Ward will be joined by backing band “The Garbage Boys.” Also performing at this show will be Ed Gray & Co., Brooks Strause & the Gory Details and Douglas Kramer Nye & The Dark Backward.

FilmScene’s “Starlight Cinema” series is bringing its penultimate screening to City Park on Friday. The movie is Steven Spielberg’s classic UFO Close Encounters of the Third Kind. As always, your ticket gets you a seat and some popcorn. Pizza from The Wedge, beer and other beverages/treats will also be available. The press release casually mentions that, “there will be mashed potato sculpting,” and frankly, I’m dying to know what that looks like. The season for outdoor film watching is rapidly leaving us, so this might be something to consider putting on your weekend agenda before it’s too late.

Iowa Public Radio’s Java Blend series at the Java House has a whole lot of solid performances lined up for the next month or two. Each show is recorded and aired live from the back room at the Java House. This week features a longtime Iowa City staple, Brooks Strause. Brooks has recently become a weekly fixture at the Trumpet Blossom Cafe, performing solo every Sunday evening. When he’s not doing that, he’s performing with his band, “The Gory Details” (catch them later at Samuel Locke Ward’s record release). I think I posted this same video for an event that Brooks performed last week, but it’s a great song and a cool video.

Saturday’s Mill show pairs up two local bands that are paving their own respective paths through the Iowa City musical landscape. There is very little information available about  Flying Liars, but here’s what we can say about them: they create lively pop songs with a vibrant visual accompaniment to their live performances. Their songs will probably get stuck in your head and they’re all decent looking folks. No Coast began playing shows last winter and released an EP in April which is available for free on their Bandcamp page. No Coast is indie pop at it’s finest. Their new single, “Smoke Circles” (listen below) reflects a band that has come into its own. We can certainly expect to hear more from them in the near future.


See you next week!