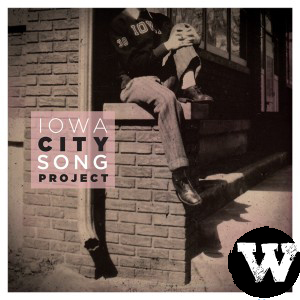 Hello and welcome to another edition of the Weekender. As you may know, the Englert has commissioned 31 artists to write songs for a compilation album about Iowa City. The appropriately named Iowa City Song Project features an eclectic track listing of original music by some of the most respected Iowa-rooted talent, including William Elliott Whitmore, Greg Brown, Pieta Brown, The Poison Control Center, Wet Hair, Brooks Strause and many more. Well it’s finally here and the Englert has stretched its celebration of the release over the course of this weekend. The Englert, The Mill and the Motley Cow will all hold events featuring some of the contributing artists. We’ll get into all that and more below:

Bret Anthony Johnston will be here to read from his work. Bret is the author of the internationally acclaimed Corpus Christi: Stories and the editor of Naming the World: And Other Exercises for the Creative Writer. Named a Best Book of the Year by The Independent of London and The Irish Times, Corpus Christi: Stories received The Southern Review’s Annual Short Fiction Award, the Texas Institute of Letters’ Debut Fiction Award, the Christopher Isherwood Prize, and the James Michener Fellowship.

His work appears in The Atlantic Monthly, The Paris Review, The New York Times Magazine, Esquire, and Tin House, and in The Best American Short Stories and Best American Sports Writing. He is a graduate of Miami University and the Iowa Writers’ Workshop, and the recipient of a National Endowment for the Arts Literature Fellowship. He has written essays for Slate.com and is a regular contributor to NPR’s All Things Considered. In 2006, the National Book Foundation honored him with a new National Book Award for writers under 35. He is currently Director of Creative Writing at Harvard. Bret also wrote the Documentary Film  about skateboarder Danny Way, Waiting for Lightning.  The film will be screened at the Bijou on Friday, November 2nd.

A while back there was an issue of Spin magazine that discussed “The Changing Face of Hip Hop.” It discusses an emerging brand of the genre—one that includes skinny jeans and hip haircuts. Among some of the artists mentioned were Big K.R.I.T. and Curren$y, both of whom have worked closely with rapper Freddie Gibbs, who will perform at Gabe’s on Nov. 3. Gibbs works within a space that effectively embraces both the fresh elements of the evolving hip hop scene and classic gangster rap. It’s a fine line to walk, but the Gary, Indiana native is recognized as one of the  most proficient hip-hop artists out there today. His latest album, Baby Face Killa was released in September to widespread critical acclaim.

With a choice of main dish:
Huevos ranchero with spicy squash and tortilla
or Penne bolognese
or Lemon pancakes with ricotta and maple