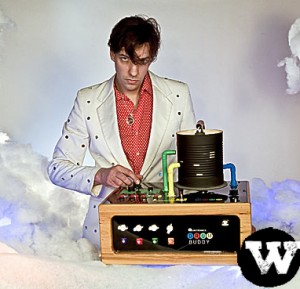 Every week I chose one highlight of the weekend, find a good picture and put the little “Weekender” stamp on it. I had a very difficult time deciding this week, as everything that’s going on is kind of a big deal. It’s a good week in Iowa City music and literature. Let’s get into it.

Eccentric husband and wife duo, Quintron and Miss Pussycat have built themselves critical acclaim in the world of indie music. Since the mid 90’s, Quintron has been inventing gadgets and using them during his live sets. Among his inventions are an organ which used spit as a tuning conductor and “The Drum Buddy,” which has its own infomercial. Quintron is often joined by his band mate/wife, Miss Pussycat who contributes backup vocals and plays maracas. Their live show is full of energy and is an all around aesthetically intriguing experience. Locals, Solid Attitude and We Shave open.

Tycho is the solo project of San Francisco artist/producer, Scott Hansen. He broke into the scene in 2002 with his EP, The Science of Patterns and has since released two full lengths and a number of singles. His latest release, DIVE came out last fall. Hansen has worked/performed with many other notable electronic and ambient artists in the past few years including The Album Leaf and Memoryhouse. In addition to his music, Hansen is also a notable graphic designer, and goes by the name ISO50. Opening for Tycho will be instrumental guitar-driven rock band, Rotary Club.

Birds of Chicago is a super group of sorts. It is the project of JT Nero (JT Nero and the Clouds) and Allison Russell (Po’ Girl). Each of their respective bands have collaborated and worked closely with each other throughout the years, but Birds of Chicago is the true incarnation of the two musicians. Their style could be described as revival folk, and the mood is soulful and haunting. The duo receives help from a backing band of season musicians. Their first full length album under of the Birds of Chicago moniker is set to be released sometime this September. Joining them will be fellow folk friend, Matt the Electrician.

Curious what's happening this weekend? Sign up here to stay in the know.

This is the third in a series of readings hosted by Yale Cohn. From the event page:

Josh Carroll, a Tucson native and moved to Iowa City via Portland, OR in 2005. He has been a published alternative comics artist since the early 90s and has created several popular strips and animated shorts. He is currently working on a book-length graphic novel that should be finished by the end of the year. In his spare time, Josh writes poetry, humorous articles and the occasional piece of business writing. His comics, including his just-published graphic novel about the history of the Englert Theatre can be found on his website:

Tom Lindsey, who, when he isn’t stalking Stephen Bloom or teaching high school English to be the next generation of Iowa’s wasteoids, can be found holed-up in an ‘80s vinyl–fortified bunker penning his memoir, “Lies My Recruiter Told Me: Confessions of a Cold War Veteran,” which, if all dominoes fall as planned, will be released sometime before “Cold War II: The Musical (3-D)” bombs a theater near you.

Todd Jackson used to cool rich people’s ass sweat for a living. He now sells insurance and is nearly done with his second novel, Detroit Trip.

He can be found online at: www.oddwitha-T.com

Hitting mass critical acclaim in the late 80’s/early 90’s, Mary Chapin Carpenter has proven to withstand the test of time. The country/folk singer/songwriter has churned out a number of popular singles over the years and released more albums than I can even count. She’s been known to write songs with the likes of Joan Baez and Cyndi Lauper. She has won five Grammy Awards, four of which were consecutive “Best Female Country Vocal Performance.” Nearly 20 years later she’s still making music and sharing it with the country.

Have a super weekend.