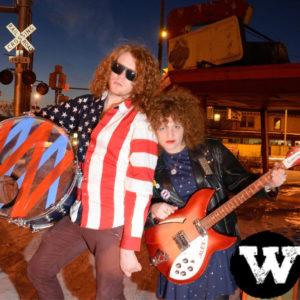 Hello and welcome to another edition of the Weekender. Enjoy!

Alex and Francis White make up the “fiery” bother/sister duo, White Mystery.  I put “fiery” in quotes not only because of their lively and relentless garage rock aesthetic, but also because well, they both have really crazy red hair. Having read other reviews and articles about this band it appears as though I have a journalistic obligation to mention that. White Mystery has two albums under their belt, each of which has been met with positive critical reception. Their live show has been highly praised as well by The Onion’s A.V. Club, The Huffington Post, The Chicago Tribune and MTV. The genre of throwback garage rock is a trend that still seems to be on the rise. There are so many bands that are trying to achieve a similar sound and style to that of White Mystery, and so many just miss the mark. White Mystery have been touring heavily and are getting ready to release their third album, Telepathic in April. Local acts Good Habits and We Shave open.

From the Riverside Theatre:

Our annual celebration of monologues, chosen from submissions by playwrights from across the country. This year’s “too much information” theme guarantees tales with moments of startling revelations…wince-worthy weirdness…and hilarious personal habits (that didn’t really need to be shared).

Submissions are directed by Jody Hovland and the show will run through this weekend and next weekend.

With no formal training, Michael Kienzle has found success throughout Iowa City and beyond with his whimsical, childlike paintings. Kienzle’s work reflects his interest in color, featuring many layers of background color applied to the canvas using a variety of techniques. This method creates a texturized appearance that gives each piece a sense of energy and movement.

Kienzle has held several shows locally at the Hudson River Gallery, and features all of his work in an online gallery at www.TheNoNameGallery.com. Additionally, he publishes an electronic postcard to a worldwide audience each morning in which he matches one of his images to a selected quotation. As Kienzle says, “Painting has allowed me to discover a whimsical and childlike joy of discovery that enriches my everyday life.”

The exhibit has been up since Feb. 15 and will run through Mar. 12.

Chicago’s Rebecca Rego has been actively creating music, one way or another, since 2006. Her latest album, Seconds is perhaps the songwriter’s most thoughtful and melodic releases to date.

Avant-garde jazz trio, The Bad Plus have been pushing the boundaries of modern jazz since their debut self-titled album in 2001, which they wrote and record after having only played three performances as a band. Since then the group has put out seven more albums. While they enjoy exploring the possibilities of music composition, much of their influence comes from popular music. In addition to their original pieces, The Bad Plus guys often put their own spin on songs from bands like Nirvana, Rush, Neil Young, Aphex Twin, Interpol and David Bowie. Their cover of Radiohead’s “Karma Police” was featured on the tribute compilation, Exit Music: Songs with Radio Heads. Sometimes choosing to play too many cover songs is a tad gimmicky, so to be clear, these guys are not a gimmicky band. They are highly regarded as artists and masters of their craft. In 2010 and 2011 The Bad Plus served as artists in residence at Duke University. The ensemble that Rolling Stone once called, “about as badass as highbrow gets” will perform two shows, one at 7:30 PM and another at 9:30 PM.