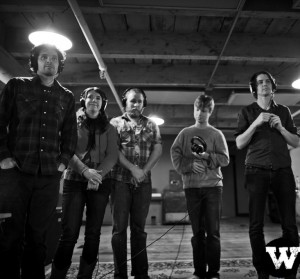 Welcome to another edition of the Weekender. Once again the weather is supposed to remain crazy warm through the weekend, so you don’t really have an excuse not to get out there and see some awesome stuff. What stuff you ask? It’s shaping up to be a pretty full one with some national up-and-comers, a few local/regional acts, a dash of comedy and a dance party. Let’s get into the deets.

Blind Pilot may have been the first show I attended after moving to Iowa City a few years ago. They played at The Picador for an audience of about 20 people. After the show I talked with them about Portland, beard envy and a west coast bike tour they had just done. When I saw them again they were playing for about 2500, opening for the Decemberists in a packed theater in Milwaukee. They didn’t seem remember me, but I was so glad to see how far they had come. Their first album, Three Rounds and a Sound ended up doing extremely well, reaching number 13 on the Billboard Top Digital Albums chart. I should probably mention that the live performance of their acoustic indie-pop tunes is fantastic. The unbridled enthusiasm of upright bassist, Luke Ydstie is worth it alone. Their sophomore effort, We Are the Tide was released in September and they’ve been on the road in support of that one. Last week I advised you all to check out Emperors Club because they are amazing and don’t play enough darned shows in town. Well if you were a fool and missed it, it’s your lucky weekend because they’re opening this one up.

I wish I could write about Skye Carrasco with the same kind of poetic lyricism that she exhibits not only in her songs, but in her everyday speech. Skye is a classically trained violinist, has played with more bands/artists than I can name and puts on a stunning solo act. When Skye is on stage, nothing else exists besides her and her violin. She’s the kind of person who puts her whole heart into her performance – silencing anyone who might be around to hear it. She released her debut album, Dark Pines in October. If you call yourself a fan of Iowa City music, this just needs to be in your collection. I’ll make it easy for you: click here. Skye’s talent and disposition make her not only one of Iowa’s favorite musicians, but favorite people. Stinky Jones opens, belting out some gritty folk rock and is joined by The Emilees, Peter Odegaard, Matthew mesaros and Eli Blank Lueders.

DJ Sit-ups and DJ Daddyhoff spinning tracks in a much needed effort to bring back Thursday night dance parties to what it once was. No cover. Unlimited fun. A weekender worthy dance party. Let’s get this going again!
FRIDAY
Second City // Englert // 8:00 PM // $22-27

The Second City is responsible for churning out dozens of well-known names in comedy – Bill Murray, Chris Farley, Steve Carell, Stephen Colbert, Tina Fey, Amy Poehler and Fred Willard to name just a few (there are enough “notable alumni” to warrant an entire wikipedia page). This year the Chicago comedy troupe comes to us as a stop on the Laugh Out Loud Tour. The show consists of witty sketch comedy mixed with some brilliant improv. Having personally seen multiple Second City shows, this one is not a gamble if it’s laughs you’re after this weekend.

Chicago singer/songwriter Matthew Santos is perhaps best known for his frequent collaboration with labelmate, Lupe Fiasco, but his personal style lies far outside the realm of hip hop. The Grammy nominated songster crafts super pretty pop folk songs that are accessible and emotional. Garnering praise from the likeness of Justin Timberlake, Eddie Vedder, John Legend and Rihanna, Santos is a name to watch out for in the next few years.

The Bob Marley birthday show has been around as long as the Yacht Club has. The description on their website simply says, “Historically our busiest show of the year.” I think we’re okay to use our imaginations with this one. Wisconsin “hard roots rock reggae & dub” band, Natty Nation will be performing. It’s probably a safe bet to assume they’ll be playing all sorts of Bob Marley favorites as well. Natty Nation is not a band to ignore either. They’ve played numerous festivals including SXSW, CMJ, Summerfest, etc. and have won a bunch of awards in the Madison area such as Artist of the Year, Best World Artist, Best Album, Best Song, and more. Head over to Yacht and keep the tradition alive, mon.

Minneapolis based band, The Pines began in Iowa City, releasing their first album here in 2004. The Pines is made up of Iowa City natives, David Huckfelt and Benson Ramsey. The duo frequently and affectionately cites their Iowa roots as a major musical influence. Huckfelt explains, “The way we grew up in Iowa, those things are very deep in your subconscious – the space, the fields, farms, silos.” This show will celebrate the release of their latest CD, Dark So Gold, an effort that once again delivers the on the exemplary Midwestern folk aesthetic we’ve come to expect from The Pines. More info, directions, tickets, etc., click here.

Local quartet, Slip Silo has your usual rock band essentials, and then a whole lot more. Every member of the band is a multi-instrumentalist and they make use of the standard drum/bass/guitar as well as synthesizers, horns and computers to fill out their unique sound. And when I say unique, I mean it. One moment you could be listening to a sweet alternative rock song, and a smooth jazz trumpet solo the next – all in the same track – and it’s not weird. It doesn’t stop there either. Ambient and electronic elements wriggle their way into the mix to complete the puzzle. Eccentric electronic and (what I believe is a) sousaphone duo, Rednips & Mr. Ting open.

Have fun out there, and good luck with wherever your Super Bowl allegiances lie. I’d imagine most of us Midwesterners don’t have much of a stake in this one (my Packers didn’t make it), but it’s the Super Bowl which means there are countless things to look forward to. Have a good weekend!