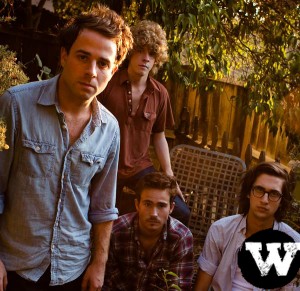 Hello Iowa City weekend warriors. This is one of those special editions that I’ve decided to extend to Sunday because Dawes is coming into town. If you don’t know Dawes, you can acquaint yourself a little further down the page. Don’t scroll too fast, though; there’s plenty to take in between now and then. Let’s get started.

The Lonelyhearts is the brainchild of Andre Perry and John Lindenbaum. They are able to create heavy, lush textures with just an acoustic guitar and a synth, though the focus lies in their storytelling though Lindenbaum’s emotive vocals. Andre lives in Iowa City and John in Fort Collins, CO, yet they still somehow manage to churn out incredible releases every year or so; they even have two Daytrotter sessions. In fact, they are currently working on a new record even though their latest one hasn’t been released to the public at all yet. From what I’ve heard, the new stuff takes their game to a whole new level. Joining the Lonelyhearts will be Alexis Stevens. Stevens released her sophomore self titled album earlier this month and has plans to tour the country soon and skip town for good. Catch her while you can!

You’re probably wondering why I’d even bother writing about a sold out show. I wasn’t really sure what I should do about this one either, but I decided to go ahead about write about it anyway because it’s interesting. Basically, the dude who plays House on television has a music project, which is something that I did not know about until very recently. Hugh Laurie has been a casual musician all his life and fans have seen bits and pieces of this background over the years in episodes of House or when he hosted Saturday Night Live. For a while he had rejected the suggestions of friends and record labels to start a serious music project, but last year he decided to finally give it a serious go. He released his debut album, Let Them Talk which features classic blues songs and well known collaborating artists such as Tom Jones, Irma Thomas and Dr. John. Laurie is very aware of his own crossing of forms of entertainment, and further, realistic about his distance from music of the old American south as an Englishman. In his own words, “You don’t buy fish from a dentist, or ask a plumber for financial advice, so why listen to an actor’s music? The answer is – there is no answer. If you care about provenance and genealogy, then you should try elsewhere, because I have nothing in your size.” The fact is, he is a refreshingly good blues singer and plays with some very talented musicians. I’ve provided a link to tickets on Craigslist above for those still interested. That might be your best bet!

White Elephant is a blues/rock band hailing from the small town of Wapello, Iowa. Using just two guitars and a drum set, the three piece creates full and smartly constructed rock songs. There is a definite garage aesthetic and the guitars can only be described as delightfully dirty. They’re having fun and that’s what it’s really all about. They released their debut self titled album last year and it looks like they’re working hard on a new one right now. In 2007 the band started a music festival, “Sounds of Iowa” which brings together local and regional acts to play in Wapello. The proceeds all go right to various charities. Justin Swafford and Dylan Sires & Neighbors open.

Dawes exists in its current form as a folk rock band. I feel the need to make this distinction because before they were “Dawes” they were known as “Simon Dawes,” a project that leaned more towards psych rock. After the departure of one of their songwriting members, they dropped the “Simon” and reinvented their sound. Regardless, Dawes has quickly become a prominent indie band since their album North Hills was released in 2009. They have collaborated with Conor Oberst and members of the Counting Crows and Wilco. After releasing their second album last year, the band toured the country with Blitzen Trapper. Opening the show is indie folk singer/songwriter, Nathaniel Rateliff. He has been met with some very positive critical acclaim from publications such as the New York Times, Brooklyn Vegan and Time Out New York.

That’s all for this week. See you soon.