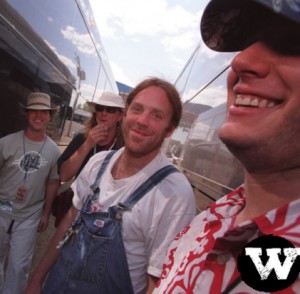 Welcome to another edition of the Weekender. Right off the bat I should mention that it’s VEISHIA week in Ames Iowa. VEISHIA takes place over six days and is a celebration of music, art, culture and education. I’ve never had a chance to experience the festival myself, but from what I’ve heard it’s a total blast. I direct you to their website for more information. Tomorrow is also the famous stoner holiday, 4/20. Whether you choose to “celebrate” or not we’ve got jam band shows on Friday and a mini music festival/bike ride on Saturday. Details below:

I wrote about comedian Tracey Ashley a few months back. She was scheduled to perform at Public Space One on a super cold, rainy night in December. So very few people braved the weather that poor Ms. Ashley decided to cancel and return another time. Well now is that time and it looks like today’s rain is clearing up. Ashley has made a career as a cruise director and has recently been touring the country in support of her comedy act. In 2007 she was a semi-finalist on NBC’s Last Comic Standing and was nominated as Best Female Performer in Campus Activities Magazine in 2008.

Reggae/ska band, Public Property have been a staple of Iowa City for quite some time now. To comment on their reggae cred, the 2009 album Work to Do was recorded in Anchor Studios in Kingston Jamaica, where acts such as Sting, Matisyahu, Jason Mraz and Shaggy done work. The seven piece group is comprised of talented musicians who have a real sensibility for their style of music. With “wedding season” around the corner, the band would like to make it known that they can be a killer wedding band. Opening for Public Property will be local synth rock band, Insectoid. Insectoid is known for their psychedelic multimedia performance including a light show and video projection.

Iowa City natives, Dead Larry have since relocated to Minneapolis, but still make a point to give plenty of love to the city in which they got their start. They bring forth “high energy funky alt-rock” and have been compared to Modest Mouse, The Talking Heads, Led Zeppelin and Pink Floyd. They play Iowa City amidst a string of midwest shows this spring. Minneapolis friends, Jon Wayne & the Pain join Dead Larry on this 20th day of April with their unique brand of they describe as “reggaetronic dub.” With two independently released albums under their belt, Jon Wayne & the Payne are a band with momentum behind them.

Before I steal the description from the Facebook event page, let me just say that this is going to be a hell of a lot of fun. Okay, here’s the scoop:

Here’s the deal: $25 registration gets you a t-shirt, cheap New Belgium beers at each location, and free and/or heavily discounted admission to the music events (which are optional). SIGN UP HERE

Then, on the night of the event, bring your money and your bike and get ready to ride. Lights and helmets are a must. Here’s the schedule:

North America is a two piece psych rock band from Albuquerque. Their debut album, Blown Out was released nearly a year ago. I’ve listened to it and it’s awesome, but I can’t seem to find a whole lot about these dudes on the web. Thus, my lazy journalistic ass will copy and paste the eloquently written blurb from the Mill’s website:

The dark, tense psych-pop of North America’s recent “Blown Out” is fully illuminated on this second release from Albuquerque-based duo. Twin New York natives Josh and Jesse Hasko. The album touches on themes of violence, childhood, exhaustion with conventional American ideals, and the thin veil between spiritual worlds. It is heavily influenced by visits from energies with uncertain intentions in their home in New Mexico, dreams, and U.F.O. encounters over a two year period.
Concepts converted to sound with unapologetic genre-bending using analog tape machines, Hi-Fi equipment, effects, and straight-ahead guitar and drums, Blown Out is the Haskos’ attempt to musically balance light and dark, a dance party with a serious journey, and the good inside themselves with the threat of potentially malicious shape-shifters outside their door.

As mentioned previously, this show will be the final stop on the Bikes & Brews tour. Big Wu are kind of a big deal in the midwestern jam band circuit and have been for nearly two decades. What started out as a cover band that only played songs by Grateful Dead, Bob Dylan and the Allman Brothers, has become an original project of its own.  The band has played numerous music festivals such as Bonnaroo and their very own Big Wu Family Reunion. Never mind that their website design looks like it hasn’t changed since the conception of the band; it’s not about that. As their bio says, “when it comes right down to it, the Big Wu is all about the music.” Music, beer, jamming, hanging with chill peeps. That’s what you can expect from this show. It should be a perfect winding down to the bike fest. Local jammers, Gone South open.

Dank you for reading.