Will Duncan: Workshop — The Art of Doing Nothing

Will Duncan: Lecture — Lessons Learned from Three Years of Silence 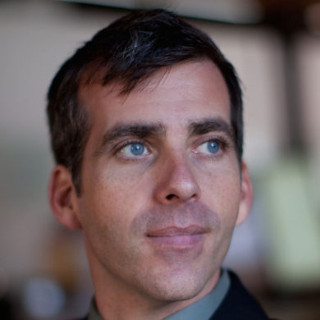 Will Duncan is an author and meditation teacher, who has recently founded the Sofia retreat and lavender farm in Prescott, Arizona. From 2011 until 2014 he lived in silence and solitude in the Arizona desert. As part of the Witching Hour festival, he will be offering a meditation workshop at the Englert Saturday, Nov. 5 at 11 a.m. and giving a lecture at the Iowa City Public Library at 3 p.m. Day passes for the second day of Witching Hour are $30, and are available at the Englert. Will met with Little Village in the isolated hermitage of the Sheraton lobby in downtown Iowa City.

What initially sent you onto your journey into solitude?

When I was 19, I was trying to impose the concept of “role loss”onto my life. Who am I actually in isolation, not a son or friend, but who am I in relation to no one? Who am I when I’m not being defined by outside roles? Have you seen Slapshot?

The announcer has … to say something about Ned Braden but all he can say is that he’s a college graduate and an American citizen. I wanted to see if I could impose this role loss upon myself, leave behind even my most basic roles, and see who I was under that.

Like in Be Here Now, when Ram Dass is on psilocybin during that snowstorm in Cambridge, he asks himself a question about who he is once he’s stepped away from all of his roles — student, son, brother, teacher, etc. Who’s left there to man the store?

Exactly. Who’s noticing that the roles have vanished? So in 1989, after graduating high school, I decided to rid myself of all of my possessions. I had a yard sale and sold everything I owned and with that money I bought a one-way ticket to San Francisco and said goodbye to my friends and family. I was able to live off the money I made from selling everything, and if I ever ran out I did farm work. I dropped in on any monastery that would have me, and I truly felt this role loss. And I felt depressed, too. I wasn’t writing my family, and, looking back, that’s one thing I do regret now — how that impacted my parents.

That seems like a young age to be involved in such an immense project.

I was lucky enough to meet my spiritual teacher at 13. Being able to have a glimpse of somebody who — I won’t say was enlightened — but who was significantly more awakened than anyone else, really had an influence on me. He was clear, very clear eyed. When you see someone clear like that, it jolts you out of the stupor. He taught me meditation and taught me yogic scripture, the Bhagavad Gita, the Upanishads.

Have you read Peace Pilgrim?

Yes! Just recently, and when I read her I realize I’ve never really done it! She makes me feel like I’ve just been playing around with meditation and being a teacher. She was so legit. Just thinking of the courage she had to give up everything

I know! And [to] just walk — it was a total surrender. But that calling is not for everybody. A week of solitude may be too much for some people. Three years especially is probably not good, not for everybody. Not all of us are called to be Peace Pilgrim.

I often find that I turn to some practice like meditation when I’m in crisis, even though I know that it’s not the most effective way to go about it.

Right, you don’t learn to use your weapons on the battlefield. For meditation to be effective, it has to be something you work on daily. I used to teach music, and I could never get my students to practice until I told them, “Okay, just practice three minutes a day.” Three minutes doesn’t seem like a chunk of time, so it’s something we can all allow in ourselves each day, and through that regular practice we really make progress. And the progress is slow, it’s not instant results, and it’s hard to convince someone to dedicate themselves to a practice that may change their consciousness only slightly after five years. But I’ve seen that even a small amount of solitude has the effect of jolting you out of comfort zone. Maybe my role as a meditation teacher is, after all, to “afflict the comfortable and comfort the afflicted.”

I’ve been reading the nun Ayya Khema’s Being Nobody, Going Nowhere, and she has a beautiful chapter on changing … steering our expectations in life away from a desire to sustain pleasure and avoid discomfort.

If I tell you we are going to drive to Chicago right now, but it is going to take a while longer since we’ll most likely encounter traffic, the experience of sitting in traffic and the trip taking six hours instead won’t be as uncomfortable. Expecting discomfort is one way we are not as deeply impacted by it. When I was in solitude, my external circumstances were not changing, yet the mind was still fluctuating. I’d practice, for example, eating the exact same meal for three months at a time, picked things that I was not that interested in eating — eating for sustenance not addiction. And even in that situation I still got exuberant and I still got depressed, I still got anxious. But after a while you see that even if the mind is still fluctuating, you’re not that interested in the fluctuations.

“Even the clearest eyed monk is silently troubled.”

In my hotel last night there was this ticking that kept me awake; it was annoying, and I felt like I’d be ill at ease today because of it, but that’s not true. I’ve stayed up all night before and still felt fine, and I’ve felt horrible even with a good night’s sleep. A life of spiritual practice has also endowed me with a lack of concern for trying to control external circumstances, which has been extremely valuable.

Yes; I often have a problem with associating. So often I feel that tragedies in my life are especially dangerous because I begin to make associations between the tragic events and the mental formations that have always been there. I’ve always felt joy, and I’ve also always felt grief, but now I have something tangible to hang my grief on — it’s exhausting.

The key is to unhinge the association through meditation. You stop over identifying your mental fluctuations with external events.

I know you’ll no doubt talk about it at the Witching Hour festival, but what did solitude teach you about society during your time in isolation?

I was in southern Arizona. Only once during those three years did I see another human face — I was amazed how much I missed faces! It was obviously extremely lonely and difficult, but also extremely beautiful. Even if my environment was stark, everything felt so full of substance. That’s something I learned about the word we live in — unfortunately, it lacks very much substance. I’ve said it feels kind of like Disney Land without an exit. In many ways, I look on my times of retreat as nourishment.

In what ways did you prepare yourself for your three years of solitude?

Well for one, I said goodbye to my parents. Both my parents had been sick, so I knew that while I would be on my retreat they could die. That time I spent with them though before I left was really beautiful. I had been studying Tibetan Buddhism in the Gelug-pa tradition — it’s a very academic tradition; the Dalai Lama studies — and there was a six year training in logic, like Aristotelian logic. After the Gelug-pa training you either become a teacher or a hermit, those are the two main trajectories. I felt called to do both. I teach, but I also felt called for solitude. I studied meditation before my retreat, too, and what to do when the mind begins to go crazy. The technique I studied was called “loong,” which is how monks identify a mental breakdown while living in solitude, and tools to combat it.

What are some of the indicators?

Froth in the urine!You may think, “Man, my meditation was amazing today!” and not realize that you’re becoming manic, but then you see a lot of froth in the urine, and think “Okay, maybe my mind is a little off balance.” Also giggling during meditation and sleeplessness at night. These are 4th Century manuscripts, but it’s all in there.

And what are some of the techniques for combating mental breakdown?

Bodhicitta, which is the Buddhist concept of compassion. Really bumping up your compassion during meditation, thinking of others with an open heart helps the mind immeasurably. The psychologist Richard Davidson asked the question, “What is wellbeing?” — mentally, but also physically. And one of the four qualities that he identified was a generous heart, or a cultivation of compassion. This is a concept [that] seems rather new in the West, but it’s been a part of Eastern philosophy for thousands of years. Also, looking at distant landscapes, watching sky, the stars: These all help keep strengthen the mind.

You said you’re especially excited about this festival because you get to share the event with so many artists and other writers.

Yes. I love looking at the acknowledgement page in books, and seeing how many people were actually involved in something that seems so solitary like writing a book. When you see that list of thank yous, you realize this person was in no way alone. It’s the same with a solitary retreat — if there was an acknowledgement page, you’d see how many people are there actually helping you.