A few weeks ago I asked The Hood Internet’s STV SLV if he was interested in chatting with me for Little Village. Under the one condition that we refer to it as “Lil Village,” he agreed. Here are the highlights:

LV: Let’s talk about FEAT. I’ll let you explain what it is, exactly because it’s not really like anything The Hood Internet has done before.

STV: That’s true. I think it maybe bears some similarities [to our previous work] but what F-E-A-T is, is a record we just put out on Decon records. It’s ten songs that we produced in collaboration with a bunch of different people. I think on each track there are maybe two or three people that we worked with. ABX and I would develop an initial framework for a song, like a chord structure or a riff or a rhythm and pass it off to someone else, to either add another instrumental part or add some lyrics, whether it’s a rap verse or whether it’s singing. We wanted to make a collection of brand new songs that seemed like an extension of the idea of what The Hood Internet had done with mash-ups over these past few years. We come from a background of like, playing and recording music together and we wanted to make some new songs but we didn’t want them to be such a far cry from what The Hood Internet does that we would call it something else. We were like, it’s us working together and this feels like part of the project, so let’s make some songs and put them together and let’s see what happens.

LV: I imagine during the creation of any other Hood Internet track, it’s you over your computer in your bedroom or something. Having all these collaborators must have been a really different ball game. Did this present any challenges? Did anything go terribly wrong or terribly right?

STV: I think the biggest challenge is that it just took a while. We met plenty of musicians along the way but we were kind of particular about whom we wanted to work with or what made sense. And then it was a matter of aligning schedules, especially if we weren’t in the same city. People have busy musical lives always, so a lot of it was just timing and shit coming together over time. Nothing went horribly wrong. I mean, there were a couple songs that we certainly scrapped that we just didn’t feel were up to par, but I suppose that’s not much different than any other record being made any other time. Overall I think we feel that it went right. We made the record that we set out to make. And even though it’s very much a compilation of songs, to us there’s a fluidity to it. That’s probably just because we’re used to hearing the songs so many times at this point, but since they all started with our musical notions and ideas, it feels very together even with all the different people on it. It seems to have a flow from song one to song ten.

LV: How many artists in total were featured on the record?

STV: I was super excited to work with AC Newman. To be clear, we were really excited that everyone was interested in working on this with us, but AC Newman was a particular favorite. I’ve been a fan of The New Pornographers since that first record and then I sort of backwards-discovered his old band, Zumpano. I’m just a fan of his melodic, pop sensibility so it was really cool to have him involved in the song. We drove out to Woodstock, New York and recorded him in their guest house on their property, which was a really cool experience. We tried to link up with Mannie Fresh for a track and that never really worked out which is unfortunate. 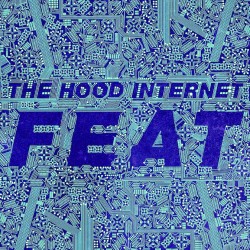 LV: Now that we’re living in a post-F-E-A-T world, does that change anything about the live show?

STV: The Hood Internet live show is still very much like something you’ve seen in the past—a DJ set of a lot of the mash-ups and remixes that we’ve worked on, but, for example, on this last tour I had a keyboard player and a bass player with me. There were a lot of people that came to our shows who may or may not have been aware that a new record came out so I wanted to present these songs like they were on [the record]. We pulled the bass and some of the synths out of the mixes of the songs and had people accompany that live. I played some midi drum pads and just kind of make it a little more interactive. You know, increased the possibility of fucking something up [laughs]. So that was cool. It made it feel like a band.

LV: Yeah. I was a little worried we weren’t going to see you.

STV: Right on. See you in a few weeks!