This Saturday, May 5, millions of comic books will fall into the hands of eager fans and curious new readers at the 16th annual Free Comic Book Day, celebrated at thousands of comic stores across the world. Many of those stores, in addition to offering books, will be hosting artists and writers for signings.

At Daydreams Comics in Iowa City, they’ll also be celebrating a massive new remodel. Daydreams reopens today, May 2, after being closed for several days to redo the space. Customers coming in this weekend (or sooner) will get to experience new carpet, custom cabinets for back issues and, their Facebook post promises, something that “will make collectors and readers both excited.”

Joining the fun in-store at Daydreams for Free Comic Book Day is artist, writer, University of Iowa alum and Iowa native Phil Hester. He’s been supporting Daydreams for years, since he was a student at UI.

Hester has a long history in the industry, as well, with respected work on titles both big-name (Green Arrow, Wonder Woman) and indie. If you’re a fan of his latest work, as artist of the recently-wrapped Shipwreck with writer Warren Ellis, you can also catch fellow Iowa comics professional Eric Gapstur, inker on that title, at Geek City Games and Comics in North Liberty for Free Comic Book Day.

You have a long history with Daydreams Comics, dating back to when they were first starting out. What keeps you coming back to them and to Iowa City, and what are your thoughts on the role and importance of the neighborhood comic shop in and to a community?

My relationship with Daydreams as a customer spans from when I was simply a fan to my current status as a veteran comics pro. It’s my second home in a lot of ways, just as Iowa City is my second home town. I went to school here, my kids go to school here now. It’s a vibrant town, especially for the arts, and Daydreams is plunked down right in the heart of it.

Comic shops are the reason comic books themselves are hanging around and actually thriving, as opposed to many other forms of print. There’s a sense of community in the comic shop. People don’t come in simply to buy their books, but to chat about trends, gossip about industry rumors, share discoveries and argue about whether the Hulk could beat Thor.

You can’t get that clubhouse feel online, even in forums dedicated to comics. It’s a lot like the record shop experience, but with a clientele that feels almost a responsibility for fostering the health of the medium they love. 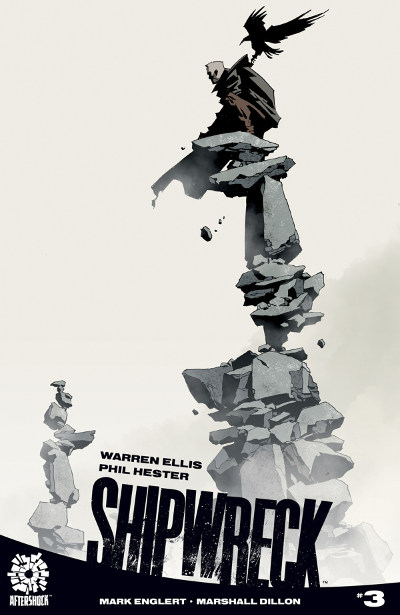 I just wrapped up Shipwreck with Warren Ellis and Eric Gapstur at Aftershock, which has been very satisfying. It’s the closest thing to a presentation of my unfiltered aesthetic as anything I’ve done. I’m also finishing a short story featuring my own character called The Wretch. I’m about to start on a new project for Aftershock and a new book with Jeff Lemire for Image.

As far as what I’m reading, I really loved Daniel Warren Johnson’s Extremity and Jason Aaron and Jason Latour’s Southern Bastards, both from Image. I’m also eager to dig into My Favorite Thing Is Monsters from Emil Ferris, which came out last year.

You were nominated for a GLAAD Media Award this year for your work on Deadman: Dark Mansion of Forbidden Love. How does being nominated for a social award like that differ for you than other nominations or awards you’ve received?

It’s a true honor, but my work on that series was a bit more technical than that of the other creatives involved. I was brought in to help with storytelling, almost as a storyboard artist. Lan Medina worked from my bare bones thumbnail sketches to create his amazing paintings. Sarah Vaughn and our editor Alex Antone deserve all the attention we’re getting from GLAAD as they made the decision to make two of the major players non-binary and bisexual respectively, and present that in a realistically romantic, non-exploitive way. I’m glad (no pun intended) they let me come along on that important artistic endeavor.

You did art for a story in the anthology Shock that came out recently. Do you have a preference between short-form, one-off work and more long-form, episodic, arc development?

I love them all, but short stories are getting harder and harder to come by, so any time I get the chance to craft one it reawakens all the old muscles I haven’t used since I started out in the business whipping out short stories for the once-plentiful anthologies of the day.

For the artists in our readership: What are your preferred tools of the trade? Do you have favorite pencils, or different ones for different parts of each task? What won’t you leave home without?

It probably changes from day to day, but I usually fall back on my trusty F lead pencil from Mars Lumograph, which I apply to smooth bristol, 300 series or better. I ink with Raphael 808 brushes (#2 and #4) dipped in Talens drawing ink, as well as Pilot brush pens. Honestly, the tools don’t matter as much as the inspiration. If I have a story I’m excited about, I will find a way to draw it.