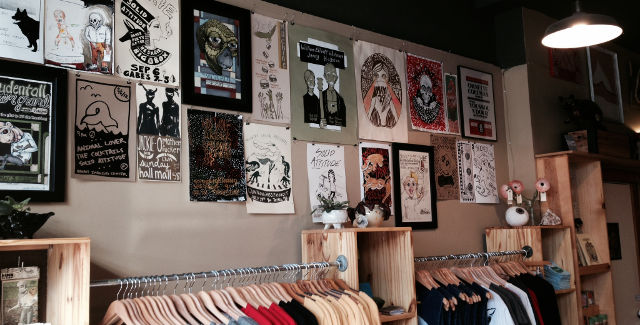 Until the end of October, the White Rabbit Gallery at 112 S. Linn St. is hosting a poster art show featuring a handful of local artists who take part in the lost art of creating handmade show posters for rock and punk shows.

If you remember “back in the day” before Facebook destroyed our culture, artists would hear about upcoming concerts, get really excited and spend hours designing and screen-printing show posters for said show. As seen in Scott Shannon’s recent documentary Just Like Being There, Chicago became the epicenter for screen-printed rock poster artists in the ’90s. Meanwhile, in nearby Iowa City, we had a large share of artists making show posters as well. And some of these artists are still at it.

“The poster scene is not totally lost, but it’s definitely something special,” said Luke Tweedy, who, along with his partner Cortnie Widen, owns the White Rabbit Gallery. “When you see a hand drawn poster, it’s a special thing. It makes people take notice.”

As a member of the band ft(the Shadow Government), Tweedy would print hundreds of posters for each of their shows and canvas the city, not once, but several times before their shows, stapling the hand-screened posters to light posts and downtown kiosks.

The posters featured at the White Rabbit are not just advertisements for concerts, but works of art. There are now alligators playing organs, paper dolls and T-Bone steaks on the walls.

The artists featured in the show include Tim Wehrle, Joe Milik, Donny Bandy, Brendan Wells, Lindsay Chastain and Sue Rhomberg, the last of which came to the White Rabbit with the idea for the show. Rhomberg, who was part of the Seattle music scene in the ’90s, printed posters for shows by Ornette Coleman, Nirvana and the Melvins, among others. Many of the posters on display are from shows from years back, with only a few being relatively current. 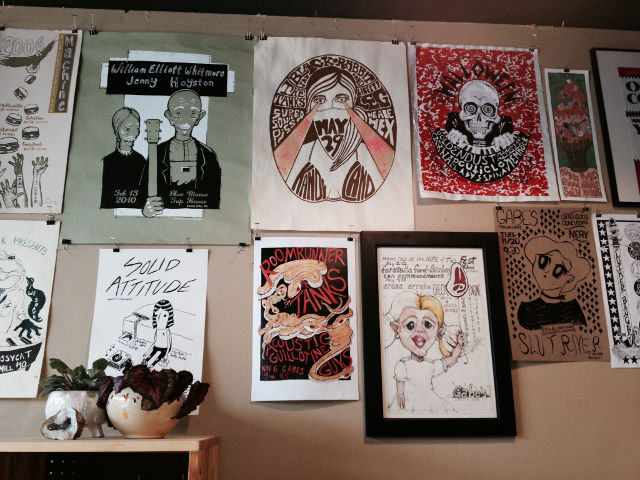 “The scene is pretty fractured, people rely too heavily on Facebook,” said Widen. “They create an event page and think that’s all they need to do.”

Screen-printed concert posters have dropped off quite a bit in correlation to the rise of Facebook promotions. And, as that trend shifted, the national music scene changed as well. Touring has become more expensive, gas prices have risen alongside drink prices (’cause you can’t play a rock show sober), and music equipment is painfully more expensive than it used to be.

As Widen explained, the creation of a show poster was a testament to the anticipation for a great show. It was a labor of love by an artists who was psyched about an upcoming show by a band they dug.

“But, the music scene has changed in general,” said Widen. “Now people just can’t afford to tour as much. Everything else has risen in price. But the cost of shows has remained the same.”

The popularity of show posters directly related to the excitement and effort of bands and fans when it came to promoting shows. Tweedy and Widen appreciate the motivation to produce art as a tribute to bands who are willing to still perform for $5 a night.

“If you’re not out there pulling screens or drawing posters or buying records,” said Tweedy. “Are you really into the scene?”