Jeff Biggers is the Writer-in-Residence in the University of Iowa Office of Sustainability, where he founded the Climate Narrative Project. Biggers, an American Book Award–winning author of several works of history and memoir, including State Out of the Union: Arizona and the Showdown Over the American Dream, which was selected by Publishers Weekly as a top ten social science book in 2012, will read at Prairie Lights on Nov. 17.

He and his wife and co-author, Carla Paciotto, have written both a play and a book about immigration in the Mediterranean, Damnatio Memoriae. Paciotto is a native of Italy and a professor at Western Illinois University, where she teaches bilingual/ESL education and language policy and planning. She is the co-author of Il bilinguismo tra conservazione e minaccia. 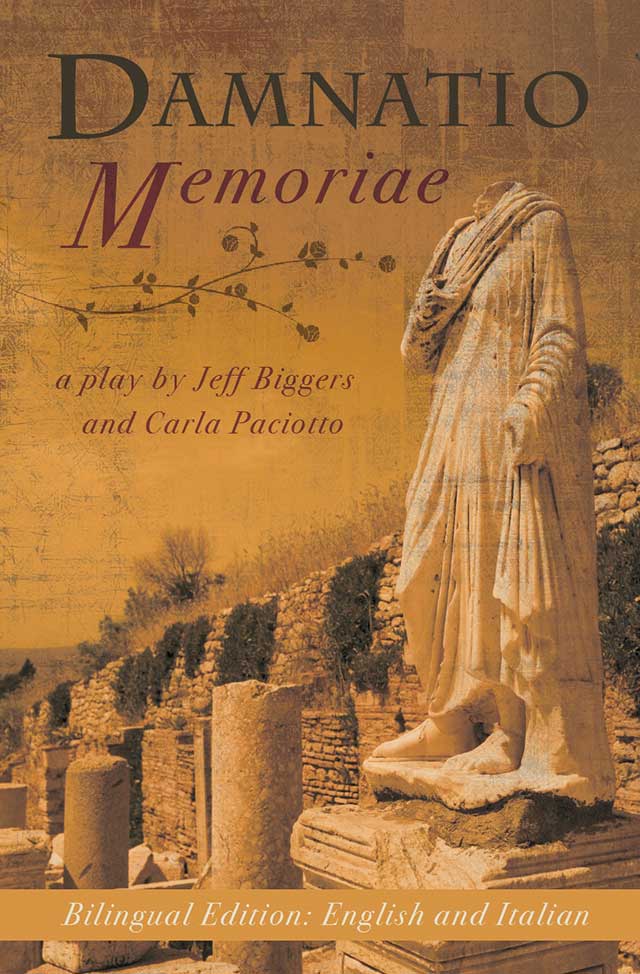 Does this latest play and book fit into your work as founder of the University of Iowa’s Climate Narrative Project? And tell us what you’ve learned about using narrative with this project.

The Climate Narrative Project seeks to train a new generation of climate storytellers, using all types of arts mediums–creative writing, theatre, film, dance, visual arts. We’ve recently become partners with Yale’s nationally syndicated Climate Connections public radio program. It’s been fascinating to work with a broad range of students–future scientists, engineers, economists, journalists, artists — and find new ways to bring together science and the arts and effectively communicate stories that inspire people to take action. Fellows have produced short films on the Iowa River and soil restoration, theatrical monologues on industrial agriculture, local organic farmers, dances on the debate between processed and unprocessed foods, radio pieces on immigrant garden projects, and visual art exhibits on biodiversity, among others. In the process, the Climate Narrative fellows have gained a whole set of narrative strategies on incorporating climate issues in their own departments, future jobs, and daily lives.

Our new play/book, Damnatio Memoriae, is part of a similar effort to create a new dialogue that recognizes climate migration as a long-term reality rather than a fleeting issue. As numerous studies — and Pope Francis — have noted, a large number of migrants are fleeing war-torn or politically volatile situations, such as in Syria, that have their roots in drought and destabilization brought on by global warming.

What exactly does Damnatio Memoriae mean, and why did you choose that as your title?

Damnatio Memoriae is the Ancient Roman edict that allowed for Emperors to remove or “damn” someone’s presence or memory from public view; to literally “delete” someone’s name and any artifacts — such as statues, coins, paintings, engravings — from the historical record when found objectionable by the emperor.

As a historian who has attempted to recover hidden histories that had been overlooked or intentionally destroyed in part of the US and Mexico, I was fascinated by this official Roman process, and its ramifications today in Italy. There is a presence of the past in Roman ruins, especially those of Africans, which I felt needed to be reconsidered. A reconciliation with the victims of “damnatio memoriae” seemed like a symbolic first step in reversing historical denial.

Tell us about your research for Damnatio Memoriae, and why you choose the stage instead of a book of history and investigative reporting.

Damnatio Memoriae draws on years of research and dispatches in Italy, including the draft of a play I wrote on immigration in Bologna in 1989. Over the past two years, I interviewed recent immigrants, toured Sicily, where most of the boats arrive from Libya, and spoke to Italian officials. With more than 3,500 deaths in 2014-15, the International Organization for Migration hailed the passage as the deadliest migrant crossing in the world.

I saw the theatre as the best place to bring the urgency–and a sense of humanity–missing from the headlines about today’s Mediterranean crisis for a general readership. To give names, life and real stories to the people who have been reduced in many ways to nameless statistics, much in the way we catalogue our ancient past. Theatre’s emphasis on dialogue, of course, allows the characters to speak directly to us; and in respect to Ancient Rome, speak in the language of memory.

I’ve turned to such theatrical productions in the past, whether it be original monologues on environmental or immigration issues, or the adaptation of my book, Reckoning at Eagle Creek, into a play about coal miners that toured nationally and included a run at the Gene Frankel Theatre in New York City.

The ancient tradition of migration knows no borders, of course -— nor do such tragedies only unfold in the Mediterranean. One in seven people on this planet has migrated from his or her homeland; and thousands die annually, making the journey. Over the past several decades, I’ve seen a continuum of stories: As a little kid growing up in Illinois and Arizona in the 1960s-70s, I’ll never forget my father’s stories about his work as a civil rights attorney with migrant workers; in the early 1980s, I worked with political refugees from Latin America, as a community organizer in New York City. My memoir, In the Sierra Madre, chronicled our one-year sojourn among indigenous people in Mexico in the 1990s, during a period of massive displacement and migration due to drought. In State Out of the Union, I chronicled how immigration has historically defined Arizona and the American Southwest, and how much of that history has been lost in the banter in political debates. Damnatio Memoriae attempts to recover lost history in a similar way, exploring the role of migration and diversity in Ancient Rome and today, as well as the largely overlooked influence of Africans, Arabs and other populations in shaping Roman history and culture.