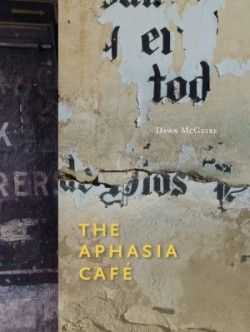 What is the worth of a piece of text? Is it found in the words themselves—in the stringing together of symbols which, by forming sentences and paragraphs, pages and chapters, communicates to the reader some message? Is the book itself merely a vessel? Surely there are those of us who would argue otherwise. A good book appeals to the senses before its words appeal to the mind. A great book can confer the greatest enjoyment, even if the reader can understand not a single word of it. In her new poetry collection entitled The Aphasia Café, neurologist and poet Dawn McGuire writes of just such an encounter.

Dr. McGuire read at Prairie Lights while visiting town for The University of Iowa’s 2012 inaugural Aging Mind and Brain Initiative Symposium. Her poem “On the Usefulness of the Parts” chronicles her visit to a university’s Special Collections library, where she encounters a centuries-old Arabic translation of Galen. “The particular text—does it matter?” asks McGuire. “Eavesdropping like that / on eternity.” One might very well ask what there is to glean from such an old, incomprehensible text, “But the milky sweet smell of the vellum, twelve hundred / years, warm as the breath of a sucking calf – / I forgot my family, my failings, my/ contingency.”

Yet “On the Usefulness of the Parts” is unique in the collection for its celebration of a barrier in language. The titular aphasia is a neurological disorder “in which there is partial or total loss of the ability to express and/or understand language as a symbol system,” according to a definition given at the book’s outset. Aphasia comes in many forms, an assortment of which are explored in the first section of The Aphasia Café. Yet what all forms have in common is their ability to disrupt the powerful tools of reading, writing and speech.

I recently asked Dr. McGuire, an adjunct professor of Neurology at the Neurosciences Institute of Morehouse School of Medicine, about the difficulties faced by those afflicted with aphasia.

“Imagine,” she said, “a lawyer who develops Broca’s aphasia and can’t express him or her self. This person with clearly high intelligence and analytic ability… you can’t speak and you can’t write, either.” She continued, “So what do you do? You do something else. Maybe it’s something you don’t love, but it’s something you can do.” The first section of poems in The Aphasia Café explores these effects through the eyes of patients as well as through the invented doctor who treats them.

The collection’s latter two sections deal with what McGuire describes as “the everyday aphasias we all share.” One of the major influences on this portion of the book is classical Chinese poetry. With all poetry, says McGuire, “we can direct an enormous amount of complexity with very few words. [But] I’ve worked with some Tang Dynasty poetry where, with 40 characters, you get 1000 years of conversation between two poets. To me it’s the archetype of poetic compression.” Indeed, The Aphasia Café contains a translation of a poem by Du Fu, in which the speaker reminisces about a poet from another era, Song Yu, as if he were old friend. “A thousand years apart,” translates McGuire, “yet we shed each other’s tears.”

McGuire acknowledges that to many people, poetry isn’t important “except in times of crisis.” I asked her what she thought of the powers of the conscious mind, considering all the new research pointing to the influence our subconscious has on our thoughts, actions and desires.

“What I believe is that we have an old brain—an emotional brain.” This emotional brain is occupied with survival and reproduction. “Those [instincts] are underneath awareness. They’re responsible for the immediate feelings of like and dislike for a person. I think they underlie bias and prejudice. I think they underlie uninhibited impulses, especially aggressive ones.”

But by no means are we slaves to our instincts. As McGuire explains, “we have this enormous neo-cortex. And that’s where choice lives. We can’t do anything about those fast, preconscious feelings and impulses about the world around us. But we can certainly work with it as a piece of information once it becomes conscious.” It is our job to be conscious of our consciousness.

Yet McGuire is certain science will never reveal the truth about our minds in a predictive manner, the way it sometimes happens in nightmarish science-fiction scenarios. “There will not be a ‘neuro-Krebs cycle,’ where we can ring up a brain state with certainty. Will we ever ‘know ourselves’ in voxels? Or in any quantitative sense? Will we be able to predict who we will be or what we will think, choose, deny, repress or love…? Will neuroscience define consciousness, or self-consciousness? I don’t believe so.” To Dr. McGuire, the human impulse to know how our minds work in such a formulaic manner is “a form of fear of the dark.”

If I were to voice one very minor complaint about The Aphasia Café, it’s that the first section passes the baton too quickly. I say this partly because the poems here are so unique; McGuire’s intimate understanding of the condition from both medical and poetic standpoints is evident. Also, one might reasonably argue that all literature is based around the tragic inability of humans to fully communicate and connect with one another. I suspect that in a world where people understood each other perfectly, artists would be out of work. But McGuire points out that art is about desiring to understand ourselves, not just each other.

“We just want to know,” she told me. “We want prophecy. Even a tragic prophecy makes men demi-gods. We want to be in on the secret. No matter how much info we have, we still fall, we’re still members of the House of Atreus. Which brings us to poetry, and its job security.”

Adam Segal is a 23-year old graduate of the UI, an unapologetic English major and student of creative writing. Though he’s just left town, he aims to do Iowa City proud wherever he may find himself.