They Said This Day Would Never Come: Chasing the Dream on Obama’s Improbable Campaign 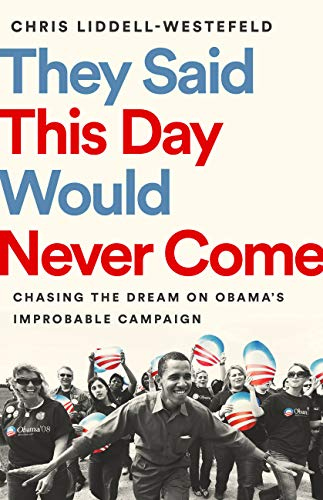 Every president of the United States dominates public discourse so thoroughly that they almost erase their predecessor from the collective consciousness. No one has done that as thoroughly as Donald J. Trump. One has to think hard to remember the Obama presidency, given the relentless onslaught of dishonesty and brutish absurdity our current president has wrought. But it wasn’t that long ago when the idealists had their moment in the sun and worked to elect Barack Obama president.

Chris Liddell-Westefeld remembers well. He started as a volunteer for Obama before there was even a campaign. He was a field organizer for the 2008 Iowa Caucus, and he became part of the campaign’s paid staff working to get Obama nominated and elected. Full disclosure: I was there too; the author and my son have been friends since high school, and I volunteered for the Obama campaign myself.

They Said This Day Would Never Come is an oral history of the Obama campaign, from the Iowa Caucus through the inauguration. Though Liddell-Westefeld interviewed him, Obama is a surprisingly small presence in the narrative. The story is told mostly by the voices of the staff and volunteers that worked for Obama’s election.

Prominent figures like David Plouffe and David Axelrod are here, giving a top-down view. But the mood of the book is set by the people who were calling voters and knocking on doors, people who put their lives on hold to help elect Obama. It’s not aiming for a balanced or comprehensive account of the 2008 election.

Liddell-Westefeld glues together the disparate voices with first-person passages describing his own experiences, and an “outside in” view of the campaign is presented at the beginning of each chapter with a collection of newspaper headlines. The people interviewed have a remarkably unified tone. They all worked harder than they ever imagined they could, they all believed Obama was America’s best hope and they all were pulling in the same direction.

These people drove the campaign and inspired Obama himself. He says “… what I saw with the staff and volunteers was this almost organic process of people organizing themselves. I was the front man, but they were the band.”

They worked so hard for Obama’s election because it felt right to them, even inevitable. How many other campaign volunteers ever said, as Bess Evans did, “I felt like I was holding lightning,” or echoed Jamal Pope’s comment, “I don’t want to be 60 years old and regret I didn’t take part in this”?

It’s timely to read this book on the eve of the 2020 Iowa Caucus. Though there’s a broad field of impressive people running for the Democratic nomination, not one of them inspires as much devotion in as many people as Obama did. They Said This Day Would Never Come is an eloquent, dramatic reminder of how American politics really can be of the people, by the people and for the people.