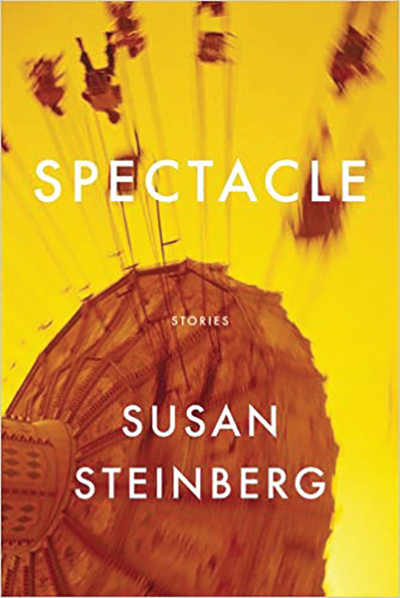 Susan Steinberg’s Spectacle collects 12 short stories bound within a slim, 135-page volume. Despite Spectacle’s brevity, due in no small part to Steinberg’s impressive economy of language, several of the stories are so emotionally weighty, readers may feel the need to rest before moving onto the next.

The best of Steinberg’s tales revolve around themes of disconnected youth, familial miscommunication and the tragic power of identity to at once elevate and also obliterate the humanity we see in others. The sex, drugs and violence that serve as the impetus for these stories are rarely shown, but their crushing impact is tangible and always present. Steinberg’s narrators, all young women, struggle internally with external pressures of power and privilege while also contending with their own hedonistic youthful instincts, which further complicate the respective narratives.

Spectacle’s most immediately arresting feature is its prose, which umpteen other reviews have described as “experimental.” To be sure, Steinberg has chosen an interesting method to tell her stories: a stilted, repetitive style that actually serves most of her narrators quite well. Their recursive self-scrutiny, bordering on obsession, teases out little haunting details that stuck with me long after I’d finished reading.

This isn’t to say that everything in Spectacle is moving or important. But at her best, Steinberg is a writer who transcends story and style and simply engulfs readers in the kind of raw, unhinged, emotional vulnerability some may not have felt since junior high school or their first day in the working world or any other day we live collectively that is more performative than perfunctory.

What’s most important about Spectacle is not the spectacular events that drive Steinberg’s narrators toward a kind of vivisection (by way of self-scrutiny). Instead, the spectacle is introspection itself — an internal magnification like reading glasses for the psyche. It is precisely what these women choose to focus on, and what they willfully ignore, that makes Spectacle such an interesting and powerful read.