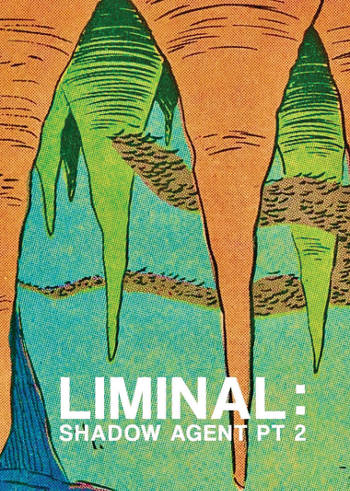 In the letter that author Jon Cone sent along with the first two volumes of his Liminal: Shadow Agent project (Greying Ghost), he calls the slim books “comic book scripts.”

They are, in a sense.

They tell a pictureless story of a superhero entering a fight against a great evil. The dialogue is called out with all-cap character names and is centered on the page. There are asterisks appearing periodically, perhaps to indicate panel transitions. There are even some captions noted, and there are direct instructions to an artist and letterer.

But there is nothing here that could become a traditional comic as we know it. Dialogue far too extensive for a single panel appears in single asterisked sections. Scenes are filled with detail too precise for even a full-page panel; expressions described with more subtlety than could be conveyed.

In Part 1, Liminal, the hero, passes a comic book shop on the street. He doesn’t linger, but the view does, focusing on Hipster Theoretician and Hipster Friend conversing about the limits of the form. “You see the form hasn’t begun to be explored. No one’s done anything new since Kirby in the early ’60s. The whole thing’s stuck, inert, dead!” says Hipster Theoretician. The character goes on to argue that comics should evolve to transcend speech, to be visual only.

“Writers can make a contribution, sure, but the artist should always be king.”

Cone’s work is this theorizing in the inverse. A poet by primary trade, he paints pictures with his words, guiding the reader nimbly and viscerally without actual imagery. These are not just comic scripts, they are already fully illustrated — just not visually. Cone is living in the space defined by his unsubtle heroic naming conventions: the liminal. This is a comic that both is, and is not. It exists in the in-between.

Over the course of the two parts, this love letter to comic style echoes, upends and teases trend after trend from the early superhero and even pulp books that Cone grew up reading. Do the hero and his female support character, Base 39, have sex to activate the magic needed for him to enter another realm? Of course they do. Does the crucial confrontation with the villain begin at high noon? Could it possibly do otherwise? Is there a cyborg battle? Yes, there’s a freaking cyborg battle! Duh. The story is not inherently funny, but beat after beat, Cone peppers allusion after allusion, making it impossible not to laugh while reading.

But the directions make this a script in the most Tom Stoppard-y way possible. They are not just instructions, they are meant to be read. They are their own literary form. “The lance, a huge heavy column, crushes Liminal’s body against the wooden barrier,” one reads. “Pinned like a Nabokov butterfly.” Cone may have been sincere that he intended to work with an artist on this, to turn it into a more traditional comic. I for one am glad that he didn’t.

This article was originally published in Little Village’s June 2022 issues.