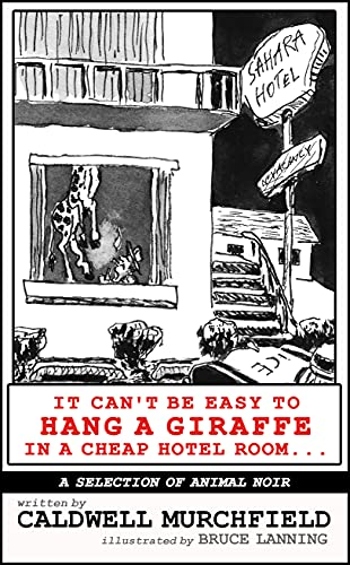 When I first received this slim volume in the mail, I panicked. How can one get a ~500-word review out of a book of less than 40 pages? I had assigned it to a freelancer, but held back, not wanting someone else to have to grapple with that dilemma. A 40-page poetry book? Sure, golden! But noir comedy micro-fiction?

Yes, you read that right.

Each page is a series of sentence-long stories, pairing an arch, detective fiction tone usually reserved for the underbelly of humanity with the underbelly of the animal kingdom, instead. If that sounds surreal, or nonsensical, or insane, rest assured: It’s all of those things. It’s also laugh-out-loud funny and a glorious testament to the virtues of word economy.

Murchfield captures an entire world in each sentence, making clear choices that nod to the tone he’s, well, aping while also creaking open the door of a universe of possibilities. Like the best micro-fiction, these aren’t snippets, but full stories unto themselves, with bold characters in ludicrously fun situations.

This writing style is an illustrator’s dream, and Bruce Lanning is clearly enjoying his part in the farce, pulling a story from each page and giving it depth and whimsy in his casual, engaging black-and-white art. He, too, is a master of storytelling in miniature, evoking mood and meaning with a single expression. Lanning captures fear in a bird’s eye, smarm in a snake’s smile.

Irony and multiple meanings form the core of many of these, with wordplay galore guaranteed to make you groan. But some of the best are more simple than that, funny due to the juxtaposition but also sad — noir to the core: “The sound of Shorty’s claws frantically scrabbling for purchase on the slick floor was abruptly silenced by a volley of gunshots.”

These stories are at their best when they are fully original, or when the pop culture references are swift and subtle. A fantastic example is Lanning’s illustration of the sentence, “Like most walruses, Duke was a mean drunk.” The story is among my favorites, for its silliness and simplicity (and also its darkness, to be honest). But the addition of a hammer to Duke’s victim in his illustration, a nod to “The Walrus and the Carpenter,” is goofy and fantastic.

But things fall flat a bit in the direct homages to familiar, rather than arbitrary, animals. References to Snoopy and Lassie and Curious George feel a bit forced. They’re not as funny as the other stories, and they run contrary to the original characters’ personalities in a way that a sentence-long story just doesn’t have time to earn.

Taken as a whole, though, this collection is a joy to peruse. It can be taken all at once or read piecemeal, making it a perfect coffee table or bathroom book. It has the feel of a 20th century joke book updated for the internet age. We’ve all read or written micro-fiction on Twitter; it’s become as ubiquitous as those joke books were 40 years ago.

Collecting it this way, with illustrations added, is a lovely nod to both traditions — and it’s a perfect holiday gift for that one person on your list with a goofy sense of humor who you can never find something for. Perhaps I’ll pick one up for that freelancer who I stole the pleasure of this review from!

This article was originally published in Little Village issue 301