Among the Living and the Dead: A Tale of Exile and Homecoming on the War Roads of Europe, the recently published book by University of Iowa Assistant Professor Inara Verzemnieks, explores her family’s diverging journeys as war descended on their Latvian home — resulting in trauma and loss that would reverberate through the generations. The memoir is littered with ghosts, but is also a celebration of the power of stories to return those ghosts to the living, if only for a little while.

“In the region of Latvia where my grandmother was raised, there are people who believe even to this day that the right words spoken in the right combination are a way of resurrecting what has been lost,” Verzemnieks writes towards the beginning of the book. 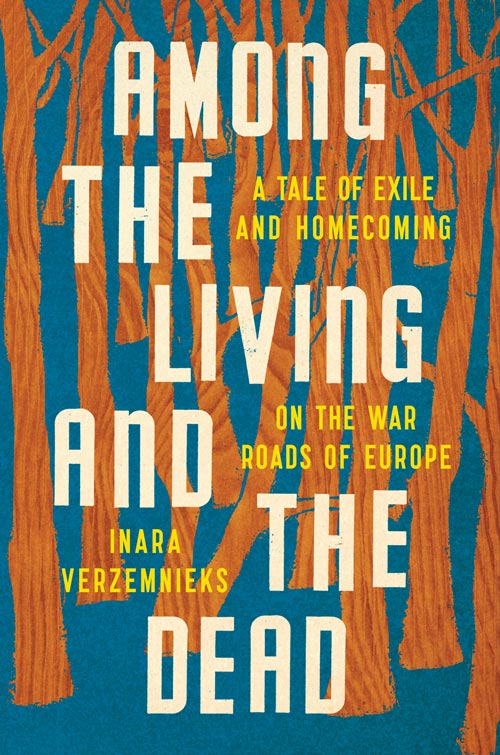 The small Baltic nation was at the vortex of the clash between the Germans and Russians during the Second World War. Verzemnieks’ grandmother, Livija, fled through the morass of war to a displaced persons camp with an infant and toddler in tow before making it to the United States as refugees. Her sister, Ausma, stayed to care for the family farm following their father’s death. When the country came under Russian control, Ausma was exiled to Siberia as a special exile — people who were banished and dumped, not in the gulags, but to fend for themselves.

When Verzemnieks was young, she was raised by her grandparents in a community of Latvian refugees in Washington. She attended summer camps where she learned folk dances and traditional crafts and spoke Latvian. At home, her grandmother often told her stories about the farm where she grew up.

“My grandmother told me these stories constantly, gifted them to me,” Verzemnieks said. “She told them in a very specific way. And why? That became a really motivating question. Why did she tell me these stories the way that she told them — so that they felt so beautiful as almost to be unreal? Well, she would do that because she wanted to try to spare me some of that pain, to create something beautiful and to have that be my inheritance as opposed to the sadness and the longing and the trauma and the separation and the silence and the secrets.”

The book got its start in the University of Iowa Nonfiction Writing M.F.A program. In 2010, just before starting the M.F.A program, Verzemnieks visited her family, including her great-aunt Ausma, in Latvia — a trip she had long intended to make.

“Because my family had been refugees, there was this sense of a lack of continuity. It felt like gaps and elisions. The trip to Latvia, for the first time, made me feel part of something whole,” she said.

Verzemnieks, previously an award-winning journalist at the Oregonian, said she initially insisted she was not going to write a memoir and was uncomfortable with inserting herself into her writing. But an early personal essay assignment forced her hand. She decided to write about Ausma.

“This assignment suddenly caused me to have to leave those very prescriptive borders that I had set up for myself,” she said. “Suddenly these things were spilling into each other — my writing and this very different way of thinking about myself and my history. I was terrified the entire time that I was writing this particular piece. And it felt really weird. And it felt really strange. And it felt awkward. And terrifying. But I also felt like, ‘Something is happening here. Something is happening, and I want to live inside that.’ ”

Interwoven into the story of her family, Verzemnieks also explores the history of Latvia.

“Part of my own baggage with conceiving of this as a book was fear that, ‘Who would care about this little region?’ It’s so obscure,” she said. “I guess that’s why it’s good to be a researcher, to convince yourself and to look at it in a new way and to realize — actually, this is a really interesting inside-out way to reconceive of and be reintroduced to some of Europe’s history and the ripple effects of World War Two.”

She started spending summer and winter breaks in Latvia, chronicling her time spent in Ausma’s house, unraveling her great-aunt’s story bit by bit and wrestling with concerns about the pain incurred by dredging these memories from the past.

“In the book, I am asking a woman in her 80s — who has made a very deliberate decision to live in the present tense, to leave behind those memories, to not go back inside of them — to answer these questions,” she said.

“In the end, the anguish that that those memories caused is balanced by the fact that I think it’s significant for readers to understand the depths of her strength. How strong she was in being able to absorb and live through all of that. I also think it’s important for readers to be able to understand the nature of trauma and our relationship to our memories of it. I don’t feel entirely comfortable with the fact that I hurt her. I don’t think I ever will. So, I wanted to put that on the page.”

Over time, Verzemnieks said, she realized how intertwined the sisters’ stories were.

“I realized there was a lot within my grandmother’s story that was infused with a sense of guilt and sadness that she had left,” she said. “She felt she had left her sister to this fate.”

The two sisters spent over a decade not knowing what had become of the other and 50 years before they were together again.

“One of the things that hurt Ausma so much is that her sister didn’t know what was happening to her,” Verzemnieks said. “The distance that created, and the sorrow that filled that distance, you don’t want to talk about that trauma. Sometimes it’s hard to find the words.”

“I don’t believe everyone should talk about their trauma and share their stories. I don’t want to make a declaration like that. I think it is deeply personal and for some people the only way they survive is by not returning. At the same time, I was talking earlier about the nature of trauma and how it isolates,” she said. “Maybe if someone like Ausma trusts someone like me to lead her through it, however difficult, then we have a chance of bridging some of that isolation, of not having further or different kinds of hurt continue to resonate.”

Verzemnieks had known some of the details of her grandmother’s flight across Germany during the winter and spring of 1944 and 1945 with a 3-week-old infant and 2-year-old toddler. But it was only as she was writing the book that she discovered the extent of the hardships of that nine-month trek followed by years in limbo in a displaced persons camp in Hamburg. All of this just as news was spreading of the current refugee crisis in the Middle East.

“That was such a difficult section to write precisely because it felt like, ‘I cannot believe that this is happening again,’” she said. “Everything that I was learning seemed like it could completely be stenciled over what was happening right now. We had learned nothing.”

She said she hopes the book will bring people eye to eye with the realities of war and what families do to survive.

“I am the first generation born in the States,” she said. “I am the unseen future that my grandparents were willing to go through hell in order to let this be a possibility. Without that, the words of this book would not have been written. The effects continue to ripple through my life. This is a case where it calls for an understanding of the collective awfulness, but also for an intense focusing on the personal, on the individual. To think of what this looks like in the terms of a family, of a life. How can you look away from that?”

Last month, on the day that the book was published, Verzemnieks pulled out old family photos. As a family of refugees, she said, she didn’t have many family photos until they started traveling back to Latvia.

“I thought, I’m going to go through photos and truly do a This Is Your Life,” she said. “I’m so glad I did that because there were so many wonderful photos I found of my grandmother reading to me.”

“One of the things that she did to reassure me, to soothe me, when I came to live with her was to read to me. She would read long into the night. It was such an incredible moment to reacquaint myself with that little girl, who from a very early age recognized the world around her through story, who loved books. And here I am now, and I have written a book. How wonderful to realize that this book holds the simultaneity of those long-ago dreams and sense of wonder, and the potential and possibility that it holds as it goes out in the world.”