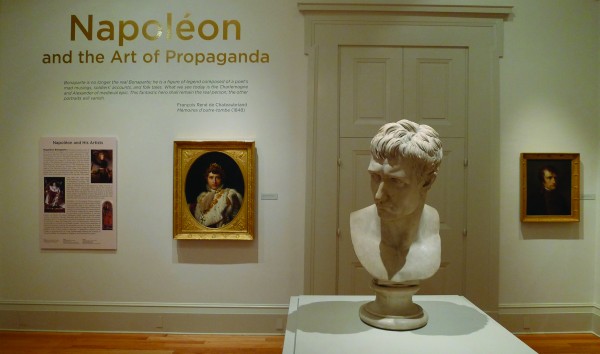 The question of how emperors and imperial aspirants fashion their cult status through images is, given our place in the present election cycle, relevant. An exhibition that raises questions and provides insight into the ways that visual propaganda shapes the image of an actual or potential government leader would have been edifying in the current political context; a consideration of how the modes of dissemination of that propaganda made their way out into the broader, industrializing, society would have provided an interesting counterpoint when considered against the backdrop of contemporary propaganda machines.

The exhibition could have done this: While it includes paintings, manuscripts and other unique objects, it is comprised mostly of multiples of one type or another (prints, coins, medals, printed books, etc). There is a story that could be told by the history of these objects, the conditions under which they were produced, the way they were disseminated, and how they combated rival images of Napoléon. But this exhibition did not tell this story.

The idea of an artist, inspired by the promise of a political leader, creating an image of extreme power might resonate with the recent history of Shepherd Fairey’s Obama campaign posters. There is a story that the exhibition alludes to about how Napoléon’s artistic program jump-started state sponsorship of the genre of “history painting,” reconceived as the presentation of contemporary, and not historical, events. But within the confines of the exhibition this allusion remains an assertion: The “new history paintings” are presented largely via prints, and we are not given any historical antecedents with which to visually judge the ways that new art form supplanted and transformed the old. There is, in the end, not enough visual evidence for a critical examination of these claims. Again, the story is there, but the exhibition does not tell it.

That said, the show is not without interest: It is, as it were, something other than its propaganda suggests.

The work in the show comes from the collection of the Parisian Pierre-Jean Chalençon, a collector with an obsession for all things “Napoléon.” He is neither a historian nor a connoisseur of a wide range of artworks, 19th century or otherwise—he is, above all, a Napoléon enthusiast. His collection reflects this enthusiasm and is held together by it. It is built around his fascination and love for the man behind the images. If the art of the First Empire overwhelmingly reflects Napoléon’s image of himself, the work presented in this exhibition doubles this reflection through the enthusiasm of the collector for Napoleon’s personal effects.

The resulting experience might therefore be best understood as an exploration of how the man saw himself. The images, insofar as they depart from documentary accuracy, embody both a self-fashioning ego and an aspiration; it is the latter quality that I would like to explore in the remainder of this review.

So who does Napoléon imagine himself to be? The visual evidence in the exhibition suggests several characteristics that seem significant. First, perhaps the most striking similarity between all of the portraits, he is beautiful. His eyes are clear, his features well-defined, his skin without blemish and his form taut within his uniform. 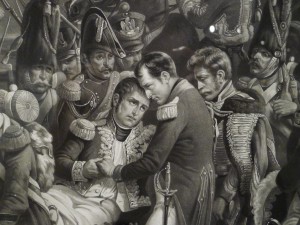 Second, he is utterly and completely calm (which implies that he is utterly and completely in control). Importantly, when others around him are in disarray (or are suffering), he is there, but unflappable. He is emotionally untouched by the world, but present to aid or comfort as necessary. Napoléon at Essling during the agony of Marshall Lannes by Jean-Pierre-Marie Jazet (after a larger painting by Bellange) is especially revealing in this instance: Napoleon’s impassive face, in profile, stands out as the single calm moment in the otherwise chaotic scene, the wrenching emotion of the event causing only the faintest visible contortion of his face.

Third, he never changes. The most remarkable characteristic of the exhibition, for me, was that all of the faces are eerily similar. Circumstances change—his age changes—but for the most part his face is consistent. No wild expressions distort it, neither do any violent poses show or occlude anything unfamiliar. How different from the present day, when politicians must be seen smiling, deep in thought, playing with their families, throwing the football, speaking publicly, whispering privately and other things besides.

Today’s politicians have many faces; Napoleon had one.

Fourth, and this is certainly a corollary of the third point, his life is entirely interior. He holds his character within himself with a tremendous amount of reserve. His face, always the same face, is relaxed and without emotion. Whatever interior life he has (and his stoic self-control betrays a significant one) never surfaces on his face or in his body.

These characteristics are all, of course, ideals. Whatever relation the historical Napoléon had to those characteristics is a historian’s job to decide. What is interesting for me to see in these images is that they embody a set of virtues that could be upheld in an Emperor. They are both an embodiment of how Napoleon wanted to be seen, and what his subjects desired—this is what made them so effective, and what draws a collector like Chalençon to value them.

After World War II, too close to Hitler’s interpretation of the “Great Man” ideal to view imperial aspirations through any other lens, it is difficult to view these images without a deep and abiding suspicion. This might be the reason for the critical program of the exhibition. But the work in the show, visually, creates a different kind of challenge. These works offer a vision of what a Great Man longed to be and they challenge us, if the vision is compelling beyond the level of historical curiosity, to re-assess whether this ideal might yet have something to teach us.