All the art has a Kirkwood—or at least Iowa—connection, whether made by students, faculty, or staff from within the state. But, on this anti-tour, one should approach the art with an eye for functionality. Kirkwood itself is one of the most significant community colleges in the country, one of only sixteen affiliated with the League of Innovation for Community Colleges (and the only one in Iowa). The spirit of the space is that of the community college: Art lives here in practice and passion. It caters to visitors coming and going by way of the Eastern Iowa Airport, and to students in the school’s well-known Culinary Arts and Hospitality Management programs. Even Business students and faculty hone their crafts here, and the art reflects this.

Outside a simple waiting room hangs Military Cadence by Susan Chrysler White (2008), a prolific painter who is an associate professor in The University of Iowa’s Painting and Drawing area. Cadence doesn’t look like a painting. It looks like a huge neon triumph of the ornamental, fresh from a gigantic space-age printer. My spellcheck turned “waiting room” into “waging room,” which almost fits better. Waging is rooted in the present tense, the right now, and the art here is cutting edge, current. Seeing it is waging the currency of space. It is a room that carries on the action of conversation. Indeed, the Kirkwood Community College Continuing Education secretary, whose desk is in front of the painting, told me, “I think it stands out, it’s odd…you don’t see stuff like that around here.” And that goes for the whole space, she said, “The hotel here, there aren’t any similar hotels in the area.”

“We have ‘Four Diamond’ Triple A rating,” she says. “We would have gotten top honors if we’d gotten a spa and pool.” (Art pool forthcoming?) The hotel is next door to the Iowa Equestrian Center. Horses stand like plastic toys on tan tracts of land. There’s a lot of green and white fences. The truck drivers will stall you out if you’re stuck behind them on the bony throw of single lane road that takes you from the highway to the hotel, which sits like an alien obelisk, unobstructed in its space by the agrarian backdrop, not unlike the placement of pieces on the green playing field in Hasbro’s The Game of Life board game.

The student hallway is filled with photos and ornate glass pieces in closed glass cabinets, and is as transparent as the hotel once you’ve 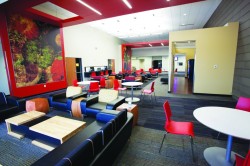 stepped inside. It’s just past the rich reds, whites, and blacks of the lounge area, which boasts a smokeless fireplace under glass in the center. John Schwartzkopf’s Geometric Tango (2010) is there—a human-sized sculpture carved in PaperStone (usually used for expensive countertops). It is a minimal, parenthetical introduction to the greater hotel space.

Conifer Smith, an instructor of Glass and Ceramics at Kirkwood, has an appropriately-titled piece: Geologic Conversations (2008). Husks of what appear to be giant shells and strange coral feel carved from invisible waves in a kind of oceanic tumultuousness. It’s quiet, though, and it represents well the entire idea of how art works here: The functionality of the place leads to the wonderful role of art as conversation.

A beautiful, huge mural of blurred lines and colored stripes, Will Mentor’s Test Plot Test (2010), hangs across from the main conference rooms. Art thrives in these cavernous hallways and ultra-modern spaces. It is an overlord you’ll never personally meet but have opinions on. It is a giant water cooler. A newly elected official. “People have so, so many questions about the art here,” the secretary whispers to me. “Mostly good stuff! They just love to talk about it, ask where it came from, know more about the artists…” This is a space where art functions as a distracting, useful, engaging juxtaposition to business, people, and their events, a bookmark holding the pages of our working lives. The space of the hotel’s business says a lot about how galleries work. Modestly, this is a place that practices art in public in a supremely effective way.

The themes in these massive conference-center hallways are symbiosis and metamorphosis: what it means to be a colorful, exotic bug trapped in the white, fresh sterility of an office. A giant Susan Chrysler White mural (It Must be Heaven, 2009) places moths against a blue, green and yellow nebulae, dangling light. The vaporous clouds behind them overlook the central cavernous hallway to the main conference center. This big, clean place is a meditation on our networking-job-and-collared-shirt culture, a world of cell phones connected to belts and laminated name tags. Yet, it is impossible to call it unremarkable, considering the astonishing art collection. We spend so much of our professional lives within places of quixotic angularity, quizzical smoothness, and questioning, aching color. The art here suggests conversation, but the building (and the area around it) is an expansive container; it never attacks or makes demands.

Each floor of the hotel features Corridor Paintings by Stephen Metcalf, not-Mark-Rothko dramatic squares in contrast to one another, but part of a larger rectangular pastiche. There’s the slightest discolored fuzz in the middle, a static which lets us know that no, this is not, in fact, Mark Rothko, and if you look even closer you’ll see that the squares of color in fact fold and turn like an unmade bedspread. This place is a great testing ground for art. This is the Nevada desert for nukes in every possible good way: beautiful, picturesque, sprawling, and a critical component of learning.

The Hotel Kirkwood Center is where parents get taken by their kids at college, intending to stall for an afternoon in a place where interesting things accidentally happen. The images put on a slow fashion show from their walls. Where formal galleries might grow preoccupied with the high demands and critical expectations of the art world, students, faculty, staff and visitors to Kirkwood are treated to an environment that encourages practice, training and conversation. Visit and you will find yourself in a place where art is real. You just have to come out and find it and walk around.

Russell Jaffe is filling in for R.A.D. Wudnaughton, who has become stricken with image poisoning after encountering some particularly evocative visuals.