You don’t have to be a mathlete—or even a little mathletic—to know that there are multiple parts to an equation. You have the numbers of course, or parties involved. You have the function. Are they going to multiply? Divide? And what will the outcome be?

“Why ps+z? There’s a lot behind it, a whole marketing campaign,” John Engelbrecht, Public Space One Director in the Jefferson Building and head of the new expansion down in the basement of The Wesley Center, tells me during a tour.

“It’s taken from math. X, Y, and Z integers. The Z is the unknown variable. There’s PS, which stands for private space, public space, print shop, project space…any of those things,” John added. “We aren’t going to define it. And Z? That’s what happens in the space when you get a group of people together. It’s about setting up a structure that is loose enough to define itself in the long term.”

This is a place that could only fairly be described as intimately cavernous; sunlight slips in through high windows, and though it’s not a wide open area, small offices stem out from the main floor space. Chairs and tables are stacked like promising stalactites of learning. When those early cave artists—seeking protection from the elements—were driven into stony shelters, they may have thought what a visitor to ps+z might think: There is so much potential here.

Ps+z is still in the set-up process, but they plan a big launch for late in the summer. The 1200-square-foot space makes for a spacious and welcoming new addition to Iowa City’s gallery scene. The large open area—filled with familiar schoolhouse tables and chairs—is complemented by a back area that will house a print shop with an aquamarine tiled floor and summer peach-colored walls. The new print shop will be run by Chris Mortenson and Kristin Necessary, graduates of University of Iowa’s photography and printmaking MFA programs, respectively.

“I wish all the floors were that color,” John admits. There’s a large materials room, now empty but for table adorned with colorful blueprints. The small, 72-square-foot offices look cozy and comfortable. In short, they’re the kinds of nooks that would bring out the artist in even the most modest individuals.

John mentions that the space was formerly a free medical clinic. In fact, the studio spaces were examination rooms at one time. “We’re interested in community supported art ideas that allow various groups to utilize the space for their events,” John said. “These five former exam rooms will be rented out to community artists in the broadest sense of the term.”

John emphasized that he doesn’t just have painters or printmakers in mind for these spaces, but writers, filmmakers, video artists and theatre groups as well, just to name a few. “We want the studios rented out to people working in different ways and encourage [them] in a collaborative fashion.”

Renting these spaces will cost $100 a month, John says. There is a strong spirit of renewal emanating from these offices. It’s a welcome alternative to the vacant lots and can’t-afford-the-rent calluses dotting the skin of our American towns and roads.

Like Public Space One, the outcomes of the ps+z equation involve the merging of community outreach and art. They’ll both be run on small but realistic budgets and they’ll both share common volunteers. Unlike Public Space One, however, ps+z will emphasize the questions themselves rather than the answers, it will facilitate the making of the work rather than the showcasing the final product. It’s something John and The James Gang—a board of business-minded Iowa City organizers investing in local art organizations like Mission Creek, The Iowa Youth Writing Project and Public Space One itself—have been wanting for some time.

With no affiliation with the University of Iowa other than keeping an eye on artists emerging from it, ps+z looks to establish itself as a linchpin within Iowa City for artists of all kinds who are looking to shape their craft. It’s a different experience—and maybe a richer one—to build a community that promotes creative expression, and ps+z’s transparency hopes to offer just that. If the studio spaces get backed up, preference for renting the studios will be given to those who lack access to things like a press, expensive equipment and other studio amenities that are otherwise plentiful in the University.

“We want all kinds,” John reminds me. “Art in Iowa City is in an interesting place. The University of Iowa programs are some of the top art programs in the country, but in a lot of ways that remains within the academic realm.”

John sees ps+z serving as a bridge between the university and greater Iowa City community. “A lot of our artists have or are getting degrees from the [university], but we’re also interested in the long term vision of art in this town, what it means to support artists who live in town or are here after their degrees,” he said. “We want an art school program beyond the school . . . we have a lot of artists in town and a lot are interested in making what they do more visible and sustainable. The opportunity presented itself, and we had the programming and the passion to bring the space to life.”

ps+z is a space within a space, existing within the Wesley Center, which is part of the Wesley Foundation of the Methodist Church, but the relationship between the religious-affiliated building owners and Public Space One/The James Gang has been a fruitful one built on shared support of Iowa City culture.

“We’ve been embraced in the space,” John continues. “The Wesley Foundation has been great to work with. The other groups are all kind of interested to see what’s going on, and there’s a need for changes in the space and more people to use it to its potential.”

Executive Director of the Wesley Foundation Paul Shultz notes, “The Wesley Foundation plans to support and encourage Public Space One to the best of our ability. We are thrilled that creative work will be happening in our space. Arts in Iowa City enliven this community.”

So what does the future hold for this bold new art frontier? John tells me the plans for ps+z are endless, so long as they think pragmatically and remain steadfast about making their nonprofit, grass-roots budget work for them to the best of its ability.

“There will be a Kickstarter campaign that will start up in June to help with the press and materials,” John says.  “The goal is for the space to sustain itself. Renting out the studios will cover us for the rest of the year of costs. Of course, Public Space One as a whole will continue with fundraising events.” 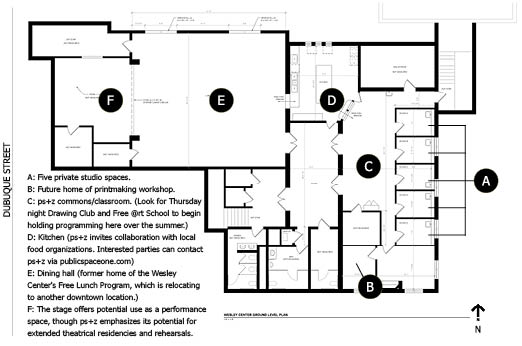 John plans on “Free Art School” workshops, as well as various separate workshops, either free to the public or at a low cost. Lockers will also be available for those who want to store materials but don’t necessarily need to rent full studio space.

“This is an opportunity for other people to get involved,” John said.  “We’ll be looking for a new art director, a gallery coordinator, and people to handle helping with workshops and studio rental spaces. Just the idea of a print shop being in here is like a business; it has to be run carefully to keep sustaining itself and functioning properly.”

However, despite functioning as a nonprofit work space, John sees a bright future for performances or interactivity in ps+z in unique new ways.

John mentions a potential week-long summer camp for kids, paired with other programs throughout the summer. “Right now it’s a goal, but if it’s done right it would be really beneficial to the community and the artists in our space.”

John also expressed interest in showcasing writers via small readings, hopefully alongside some of the visual art that might also be produced within ps+z. “We’d like to work with the School of Art and Art History and even try to bring Intermedia Open House here,” John adds.  “There’s a group of us who would love to see it grow.”

John notes that the partnership between Public Space One and The Wesley Center is one representative of communal spirit and interdisciplinary sharing. “Yes, The Wesley Center is a religious foundation,” he explains, “but the gist of us being here is that we are a community and we do things in this community. They wanted people who did good things for it.”

Paul Shultz adds, “We appreciate the value that art brings to the larger community and how it engages a deeper dialogue with our humanity. Even the process of creation brings energy and insight. We admire Public Space One’s collaborative approach to art and to artists. We are pleased that our space will be a part of that approach and can’t wait to see how our whole community will be impacted by what’s done and shared here.”

“I believe art can save lives,” he says, smiling. “I believe art saved my life, and to me that’s as powerful as any field or belief you could get into. If it gives your life meaning, that’s the most important thing.”

Russell Jaffe is filling in for R.A.D Wudnaughton, who was killed in a mid-horse collision and is currently recovering nicely.