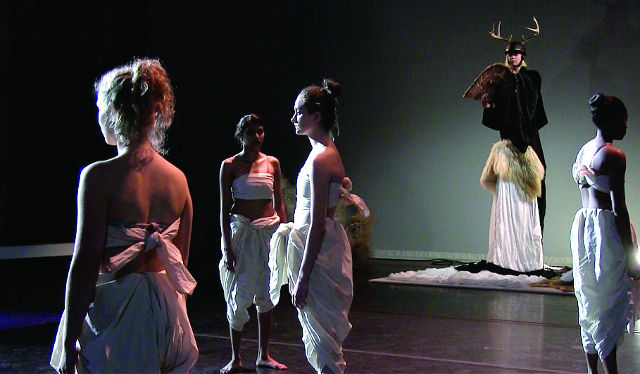 The Work Between: Collaborative Performance at Space Place Theater, which ran from Dec. 5-7, 2013, was the outgrowth of a class that brought together artists, dancers, composers, musicians and stage managers for an event that included video projections, sculptural set design, interactive dance and musical performances. There would be much to talk about: stunning visual vignettes, compelling human movement and engaging music—but for the purposes of this review, I would like to specifically consider the collaboration. Collaboration is an important trend in contemporary art today, and it suggests a couple of questions: What can we learn from each other? What happens when we work together?

What awaited them, the audience, as they stood outside in a dim, muffled hall Thursday, Friday and Saturday night at North Hall? They wore warm jackets and navigated programs (as though for a wedding or circus) in which a map-like diagram inscribed their anticipation.

A growing body of theory has developed around some of these questions, and one concept introduced by Charles Green and developed by Grant Kester is that in a collaboration between two people, there is a “third hand” that emerges out of the space between them that shapes the final work. It is the “third hand” that transforms the work from a collection of competing voices into a coherent and potentially transformative whole. The idea of an unseen force guiding work is not unfamiliar to artists working alone, historically bearing the name of the muse or goddess who sings through the voice of the poet.

As the dappled flocks flooded through the door, darkness enveloped them like the lightlessness imagined within a body. Inside-out one might have felt that soft, intertwined space. Some moved awkwardly toward chairs, then drifted forward into the performance.

The Work Between contained a number of features designed to subvert the traditional structure of a dance performance where dancers are on the stage and the seated audience has an ideal vantage point. There was no defined position for the audience, which was encouraged to move around the performance and therefore to view the work from different perspectives. There were multiple, apparently independent vignettes performed simultaneously, which, combined with a lack of a defined position for the audience, meant that a “complete” experience of the performance was impossible, even as different perspectives could be assumed throughout. But such interventions have become de rigeur in much contemporary work, allowing the performance to move within these new conventions without the pressure of their novelty, and also allowing the critic to consider the possibilities within this performative mode.

Juicy spotlights shed emphasis on major organs—pockets of intertwined rituals and theatre stages. The audience grouped around these with puffy clothes, and wet eyes opened upon the graceful movements of dancers dancing—vignettes of arms and legs and eyes unfolding. Metaphors and rituals of the contemporary human, human movement and human essences condensed in the dancing. Like a Möbius strip, the audience wrapped around and tangled in the insides and outsides of shifting performance constellations. 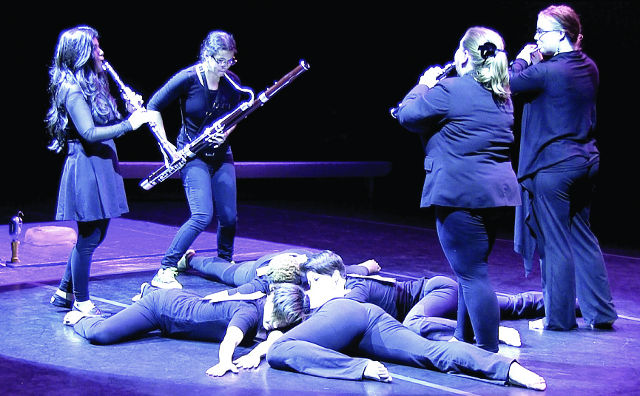 Individual performances were situated on the periphery, including Alex Bush’s undulations lit by video projection (creating a muscular, twisting screen), Lindsay Fisher’s tango with a plastic drop cloth and Kalmia Strong’s caresses of a block of ice. These intimate, personal monologues acted as counterpoints to the performers’ alter-egos that appeared in the more elaborate multiple-dancer compositions that occupied the central performance space. The effect of the whole spoke of a divide between an interior and social persona — who we are when alone, who we become when together.

One could turn in their footsteps and open upon a new window of condensed human expression, another stage, a shift in happening, and be inside and outside—collaborator and foreign voyeur—in a dark pregnant womb of multifaceted activities. Themes included the body and its rituals, and groupings of these; sinew and tapestries of romance, vacuity, alienation and exuberance; affectations of that otherness which makes many persons one. Soundscape, a lively though haunting music, was lifeblood and lent connectivity to the disparate components of performance assemblage.

In Traces of Everything, Bush, Fisher and Jeremy Blair asked each other “get to know you” questions—sometimes quite personal—as they took turns positioning the body of the dancer answering the questions. In We Three, by contrast, Alexandros Spyrou’s piano composition, Kuldeep Singh’s voice and Blair’s movements kept their distance from one another, responding to each other with a different kind of call and response.

No one could imagine a nervous system, a chart-maker for this creative vision, as the happening belonged to no specific mind, was seamless and nameless, distinct yet indefinable; an unaccounted kind of magic.

What can we learn from each other? One theme of this performance seemed to be that we push each other into new and unexpected experiences when brought together in pursuit of a common task, or in an intimate engagement in a shared space. What happens when we work together? In the presence of the “third hand,” it becomes possible to engage territory foreign toward any particular agenda. Connections appear in unexpected places. In this performance, the lighting and the music were the glue that held many parts together, holding collective and personal actions in tension as the audience moved through subjective and intersubjective spaces.

Amelia Rose Salisbury is an MFA student in Painting (2014) at the University of Iowa, Iowa City. She earned a previous MFA in Poetry (2008) from the Iowa Writers’ Workshop.

Brian Prugh holds an MA in Philosophy from the University of Chicago and is currently an MFA candidate in Painting and Drawing at the University of Iowa. In addition to his art criticism for Little Village, he is editor and co-founder of the Iowa City Arts Review.