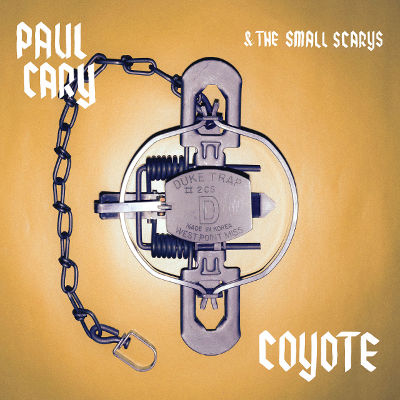 Paul Cary and The Small Scarys

Paul Cary’s last album Ghost Of A Man was a go-for-broke alley brawl of a record: It was sparsely arranged, emphasizing Cary’s voice and guitar. His newest album, Coyote, adds a full band that includes Russ Calderwood’s bass and Adam Penly’s greasy, distorted Farfisa filling much of the aural space left open on Ghost.

Up-tempo songs like “Daggers” and “Come Back Down” have the raw, driving sound of Stooges or Yo La Tengo. But songs like “It’s Alright” leave plenty of space for things to get spooky. Written about the disappearance of his grandfather, the first half of “It’s Alright” pins Cary’s wailing voice to single note lines from the guitar and organ. The spare beginning builds up to the savage entry of bass and drums in the middle of the song, and stretches out into an extended, drone-tinged instrumental groove.

“Lost Jump” has the garage-punk chug of Question Mark and the Mysterians. Layers of distortion nearly overwhelm the sound of every instrument; the drums sound like they’re being played through speakers with ripped cones. You rarely hear dirty, overdriven production like this on a rock record; it’s more the province of extreme industrial bands like Einstürzende Neubaten. Engineer/Producer Greg Norman is able to maintain some space and clarity in the songs despite the grunge and overload, which is a magic trick; in less experienced hands, these songs would collapse into mush.

Cary’s dark, folk-tinged dirges would work fine as solo acoustic performances. Putting The Small Scarys to work on them adds a second (or third) dimension; you get great songs with weight that justifies the band stretching them out into trance-inducing kraut-rock-esque grooves.

Every song on Coyote is about being lost, broken, in trouble, lonely and confused, and the damaged, gritty sound reflects that lyrical content. Cary’s voice wails, breaks up and veers out of tune, his primary emotion is ‘bereft.’ He lives in a world where everything’s dented, broken or shoved out of place. Something’s wrong with Paul Cary, but sometimes wrong is right.