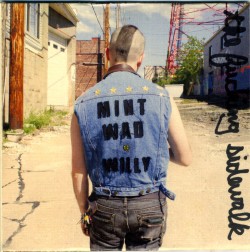 Mint Wad Willy left Iowa City a couple years back after putting out a couple of CDs and are currently living and playing in Omaha. Their new record The Fucking Sidewalk is a change from their earlier album A History of Guns & Liars, which was mostly rock with a Southern flavor, though executed with skill and enthusiasm. The Fucking Sidewalk is a more devious devil of a CD.

Some of Omaha’s earnest roots-folk scene seems to have rubbed off on them, but they’re not Bright Eyes, or Cursive, or anyone other than their own demented selves. If anything they’ve been drinking out of the same jug as lo-fi weirdos like Sam Locke Ward and Ed Gray. They still have a country tinge to their sound, but they’ve gotten rougher and more spastic than they were a couple of years back. The vocals are distorted and sung as though being shouted through the bars into an empty jailhouse corridor. Their guitar playing has some of the same relaxed grooviness of their earlier recordings, but occasionally they melt down into chaotic expressionist noise.

“So they tied me to a tree and placed an apple on my head / There’s a blind man shooting and I got other things to dread” they sing on “William Tell,” one of several ragged waltz-time songs on Sidewalk. They come close to going the full Tom Waits on this one, echoing some of his deep America weirdness and balls out rawness.

Mint Wad Willy is a zen koan—the more sloppy and deranged they get, the more focused and perfect the result. They’ve gone from being a good, if conventional band—the kind that could build up a following at The Yacht Club and sell many pitchers of Fat Tire—to being something strange and original. They’re outstanding in their field, because they ran their van off the road.