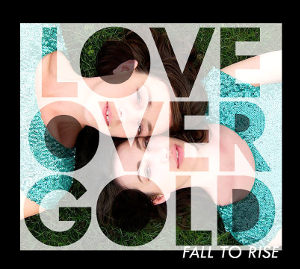 Love Over Gold is the name of a new collaboration between Pieta Brown and Australian singer-songwriter Lucie Thorne, who met during a tour of the land down under a couple of years ago. The two became fast friends, and, after some correspondence and planning, they formed the group named after a Dire Straits song.

With established solo careers already, a new collaboration between the two musicians might at first glance seem unnecessary. That said, the pair’s first album Fall To Rise is impressive in its cohesiveness and a testament to the easy partnership they have built: Recording was done during Thorne’s brief stop in Iowa City while en route to Europe.

The songs paint dreamy abstract images of personal moments. Thorne and Brown sing together in soft harmonies over chiming acoustic strumming and gently picked electric guitar atmospherics. It could easily be assumed that Bo Ramsey played electric guitar on the album—Thorne’s guitar has a similarly understated, clean-ringing reverb and vibrato that pleasantly accentuates the sparse arrangements.

The centerpiece of the album is “350 Parts Per Million”—the first environmentally-themed song in Brown’s canon and the source for the album’s title. The title refers to the theoretical threshold level of carbon dioxide that can safely exist in earth’s atmosphere, but it is inspired from a more personal place: Prior to performing the song at CSPS in early October, Brown said that she had been recording her next solo album at Justin Vernon’s (of Bon Iver) studio in Eau Claire, Wis., and he had said to Brown that, to him, her father Greg’s songs capture the essence of the Midwest. Her story gives context to “350 Parts’” lyrics, which mention Eau Claire and indirectly her father:

10,000 years of Holocene / Disappearing just like snow / And every spring you still grow / On the earth among the butterflies / Up from the ground, the colors of the crow / Sing the dirt, sing the fields / Sing the forest while it’s here

Fall To Rise provides the fans of Brown and Thorne with a beautifully-crafted addition to both of their careers. They clearly enjoy working together—it was hard not to notice their giddiness from playing live together at the show in Cedar Rapids. Hopefully this is the beginning of a long partnership with future releases.