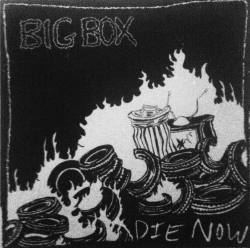 There’s a whole world of Metal music, and it’s a messy place. The last time there was a unitary ‘Metal’ genre was around the time Black Sabbath made Paranoid. These days, Metal shades off into Indie (Pearl Jam & Soundgarden were basically flannel-wearing Metal), Emo, Screamo, Punk and who knows what else—no doubt a Metal/Dubstep Mashup is minutes away. Big Box’ Die Now is some- where in there, wandering around in Iowa City’s unique metal micro-climate, which has produced some fantastic music while mini- mizing the bone-headed attitudes and preten- tions that plague commercial Metal.

The opener, “Disease Is Crawling,” be- gins with the slowed down sludginess of the Melvins before switching gears to triple time scream punk. “Cut Up” follows with more riffy speed-punk sounds—a bit like Black Flag with a fuller guitar roar. “When It’s Easy” is actually kind of funky, for loud, distorted guitar music—there’s kind of a swing to the thrashing. Each of these songs races to peg the VU meter, but the variety and range of songwriting is surprising, which is a long way around to saying they’re not boring, and I can tell the songs apart. That isn’t a sure thing with a lot of Metal.

This was recorded at Luke Tweedy’s Flat Black Studio and reflects Luke’s unique sym- pathy for music that’s fast, loud and hard. Listening to Die Now. there’s a distinct plea- sure I get from the sonic texture—tight guitar- bass riffing that grinds away like a belt sander (in a good way), and pummelling drums. Lyrically, I have no idea what the poor guy is yelling about, but it doesn’t really matter, it’s just another instrument in the mix. I really don’t care what Die Now is about, it’s just good

clean brutal fun, like getting slapped in the face when you’re numbed up with Novacaine.

Kent Williams has too many pairs of shoes, some dating back to the mid-1970s.