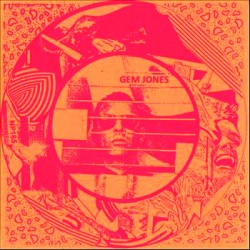 The latest EP from Gem Jones, Exhaust, is a brief study in juxtaposition. At only 19 minutes, Jones milks Exhaust for every second; vacillating wildly between light-hearted pop romps and intense aural assaults. Yet Jones finds a nice balance, keeping the effervescent material exciting with kamikaze guitar attacks or off-kilter horn lines.
The opener, “Shiver,” is a gleeful, sun-baked number with vocals so caked in reverb, they just spill out of the speakers. The cut toots along on a keyboard pulse which should have soundtracked Mickey Mouse down the river in “Steamboat Willy,” before breaking down into jarring, skronky guitar workouts after each chorus.

Jones follows that up with an easy piano shuffle, some baritone wails that seem to be about a girl and loads of “ooh”ed and “aah”ed backing vocals on a song called “Starquisha.” The second track, even though it comes with a pleasant swing, is still pretty free and challenging. Jones jams a pained howl in your ear right at the top of the song, and is once again liberal with some spacey, heavily-overdriven guitar solos.

The middle of the EP is split between two instrumental numbers. One, “No Why,” is an upbeat organ workout with a cool, martini-sipping swing. The second, “Jam in P,” is a hard left into free jazz. Jones breaks out a belching trumpet, lets the drums off the leash and rewinds the tape on a guitar solo for “Jam in P.”

The crown jewel of Exhaust is the six-minute psych-out “Black Robin.” The fifth track off the EP is a psychedelic, free-jazz, fever dream where the horn section has polished off a bottle of tequila; the drummer is trying to steal the spotlight with furious, machine gun fills; and, the guitarist is just trying, doggedly, to keep the whole thing on the beat. Amidst all of this, Jones barks his way up and down the scale and unleashes blasts of organ. It’s one of the most pleasurable dins to come out of Iowa City in a while.

John Schlotfelt is perfecting his Bloody Mary mix. Though, like any creative endeavour, perfection is almost certainly bound to elude him.