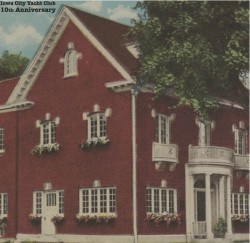 Has it really been ten years since the Yacht Club opened? Really, the story goes back a few years before that. Owner Scott Kading bought the Yacht Club building and set about recreating his favorite college hang out. Renovating the building was only the first part of his journey. It took a couple of years of legal wrangling with the City of Iowa City to actually get the doors open and the beer flowing. Since then it has become much more than a quixotic nostalgic impulse. If The Mill is Folk Music and Gabe’s is Rock, the Yacht Club is the place bands go to rage.

The Yacht Club’s popularity isn’t tied to a particular genre. Kading’s taste in booking is stylistically eclectic; reggae, hippie jam bands, funk, jazz, dance DJs and punk co-exist harmoniously, sometimes all together on the same night. What ties it all together is that a Yacht Club band comes to play on a stage elevated just enough to trip over, up against a brick wall and exposed plumbing, inches from the audience. More than anyplace else in town, playing is an intimate, personal experience. Dennis McMurrin (aka Daddy-O)—who has played nearly every month since the bar’s opening—sometimes set up in the middle of the floor to get even closer to the action.

The 10th Anniversary CD was produced to be handed out at their annual late-January celebration show, but if you bug the guys at the Yacht Club, you can probably still score a copy. It’s a remarkable document of live performances from the club. Kading installed a combination live mixer and multitrack recording system, so these songs are live performances with first-class clarity and balance. It’s the next best thing to being there, though nothing can match the Yacht Club on a good night. With off-the-hook jams from Public Property, Roster McCabe, JC Brooks & The Uptown Sound and others, the Yacht Club 10th Anniversary is a unique document of a unique, funky, friendly, Iowa City tradition.