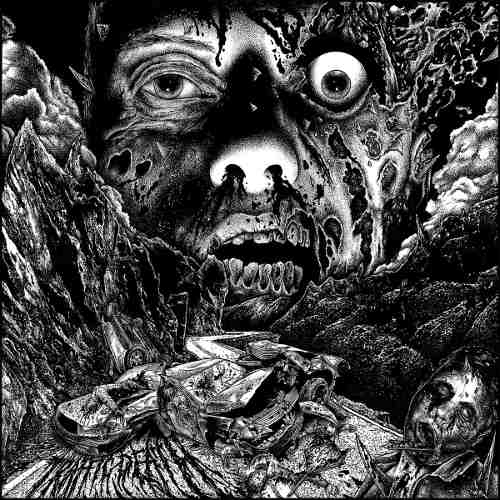 Let me start out by saying that it brings me so much joy that we have, here in Iowa, a label like Sump Pump Records, that continually releases top-notch metal records. They’re no one-trick pony; they release other genres all the time, including many albums that have been reviewed positively on this page. But someone there knows their heavy music, and I always feel a little rush of joy whenever I open an email or a package from Sump Pump, because I know it’s going to contain something kickass.

I was home alone recently (a rare occurrence) and I took the opportunity to crank the volume and spin Dead End, the latest album by Des Moines four-piece Traffic Death, released on Sump Pump in December 2017. No, I don’t have neighbors. If I did, their faces might have melted, and I would’ve been too wrapped up in the sounds to notice.

Dead End, the band’s second full-length album, is a delightful horror show. It bounces gleefully from subgenre to subgenre, never quite deciding for more than a riff or two whether it wants to be doom, or speed, or death, or thrash — or just good, old-fashioned horror rock. The opening track, “Spontaneous Decomposition/Nothing to See Here” slides into your ear with a slow tease of a drone before slamming hard into the take-no-prisoners vocals.

The lyrics on the album are unflinching in their exploration of death and destruction, doused liberally in shock horror tropes, but approaching philosophical on several tracks, especially towards the end. The sci-fi fright fest of “Internal Void” (“A crypt filled with corpses/From massive experiments/Some appear human, others a mystery”) slips seamlessly into the introspection of album closer “Gone Forever/Consumed by Fire” (“Brains are unable to turn off, The screens are blaring and always on/No simple way to sit back and relax, When our conscience is all but gone”), with no irony or disconnect — the internal fears we face are inextricable from the external.

The high point of the album is the arc of three songs that lead up to the final track: “Run Them Out,” “Gun in Hand” and “Internal Void.” They are fun, relentless and rigorous in their musicality. “Run Them Out” and “Internal Void” both kick off with the trope of spoken text, the latter using a quote from the 1979 cannibalism flick Don’t Go Near the Park. The driving speed of “Gun in Hand” drags you by the neck for all but the last five seconds, then drops into a doomy despondency.

All told, between the sometimes campy, sometimes dark lyrics, the unstable archetypes and the ‘80s throwback power metal guitar riffs, Dead End is an album that will take you on a trip through some dark places while having a hell of a lot of fun.

This article was originally published in Little Village issue 235.