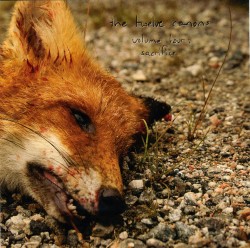 The Twelve Canons is currently singer/songwriter Jim Durocher and multi-instrumentalist Justin Norman. Volume 4: Sacrifice came with a note from Norman that mentioned “FYI it was recorded in a mental institute.”

Jim Durocher’s personal demons are no secret around Iowa City, but it’s not my place to air them here; I only mention it here because when listening to this CD, I’m struck by how focused and carefully wrought Durocher’s songwriting is. As the title suggests, this is the fourth Twelve Canons album, the three previous done in collaboration with Iowa City’s extraordinary Alex Body. Durocher’s change of venue took the music in a different direction. There’s still plenty of Durocher’s trademark neo-Renaissance creepiness, but Justin Norman contributes a remarkable setting for his songs. I assume the string arrangements were produced by way of a sampler, since no string players were credited, but they sound wonderful.

There’s no mistaking the darkness of Durocher’s imagination. Sacrifice is a concept album sung in the character of a sexual sadist and remorseless killer. When a serial killer can have a hit TV series, this may not be as edgy as it used to be, but Durocher’s fear, anguish and despair comes through as authentic. “Quiet now, or I’ll sew up your mouth” he sings in “There’s No Getting Out.” In Daddy Longlegs he says “‘it’s wrong,’ they all say ‘for the child’ but it’s my daddy’s way…when he’s in me I’m not alone.” And the first line of the record is “Let me kill you, I’ll use the sharpest little knife.”

For the record, Jim Durocher is one of the mildest, least threatening people I’ve met; I say this because some people have a hard time separating an artist from the art. Sacrifice is more than gothic transgression for its own sake. It is music of rare, horrible, beauty.