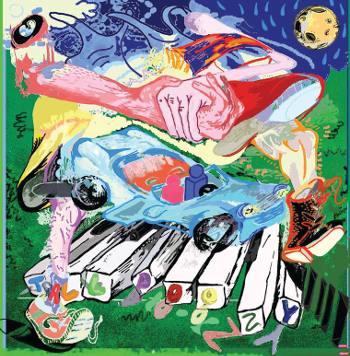 Most of the tracks here sound as though they started on the guitar instead of with samples and drum machines. The guitar chord sequences lead to songs with more of a pop feel. But they hew close to the hip hop aesthetic, anchored in sparse beats with a deep head-nod feel. Bozaan pushes the lush, melodic sound further with her sweet alto, touched with a hint of smoke. She sings quietly, close to the microphone, recalling Billie Holiday and Corinne Bailey Rae.

On “Yours Always,” Bozaan croons, “Lessons lost in dresser drawers / take the honey leave the store / Ha I’m a gangsta now” over laidback, sleepy keys and guitars. The joke is that she’s a gangsta only in her imagination. This is underlined by the reverb on the “gangsta now” refrain, recalling the way Ken Nordine’s Word Jazz project used effects to signify inner monologue.

The gentle keyboards float in an ocean of reverb, a la Boards of Canada. But Boards starts with hip hop and drifts away into their own imagination. Tall Doozy goes the other way, borrowing Boards’ texture but keeping the songs in the foreground.

“Try For Me” encapsulates the Tall Doozy project. Jim Swim’s laid back, autotuned rapping/singing has a tight rhyme scheme and stumbly-graceful triplet flow: “It’s a shame I’m possessed by what’s less than best in me, genetic destiny, can’t let it rest in peace …” Bazaan’s hook, with multi-tracked harmony, sounds effortless but also full of longing: “Try for me, fighting the thing that fills your mind.”

The use of autotuning is a cliche, but it’s a big part of Sad Girls’ sonic texture. If you’re familiar with the Lil Wayne oeuvre, you know how Auto-Tune sounds when you crank up the pitch correction. James deploys it subtly to add emphasis to vocals, then turns it off, letting Bazaan’s natural voice shine. It’s more a sable brush touch than a Krylon spray-paint blast.

Tall Doozy is hip hop/R&B made a long way from the urban crucibles that forged it. It’s Iowa music, peculiar to this locale. Young artists are tempted to imitate their heroes, but Bozaan and James have left mimicry behind. They took the lessons of Drake and Lauryn Hill onboard, but found their own voices.

When Bozaan’s voice soars on the hook for “Come Up,” the music feels like dreaming about flying. A through line in Jim Swim’s music, from his first EP titled Half Woke, is finding the music at the borders of sleep. Sad Girls is James and Bozaan’s lucid dream.