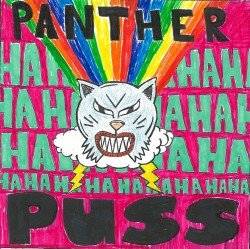 For his second in a year-long series of monthly releases, Samuel Locke Ward has dipped back into more familiar territory. After the top-40-skewering electro-pop on his January release, 7 AM New Year’s Day, Locke Ward leans heavily on his trusty acoustic guitar and Casio keyboard for a 16-song collection of weirdo pop-ditties on Panther Puss.

The album opens with the downtrodden psych-folk of “Here Comes No One.” Locke Ward describes an emotional wasteland where “no one shall be true…and no one cares for you” over a tambourine plod with just enough will to find the downbeat and a guitar that shambles along despite having no affection from anyone or anything. This is followed by the unnervingly psychedelic and equally desperate cut “Ships Won’t Sail.” The second song churns along on choppy strums from Locke Ward’s guitar but the teeth-gritting jitters the track induces come from the noodling guitar solo looped backwards. “Ships” grows more portentous at the end with each staccato repetition of “It feels like this ship might never come in,” the unspooling solo matches Locke Ward’s increasingly unhinged vocal performance.

It’s never all doom and gloom with Locke Ward. No matter how terrible everything looks, there’s always a crooked grin to be found. The album’s lead single, “Swastika Eyes,” is a darkly comic break-up song. Instead of focusing on the shock at discovering that a new girlfriend is a neo-Nazi, “Swastika Eyes” highlights what might be the monotony of a relationship with someone with such a singular and all-consuming obsession: “You’re master race spiel has me yawning every time / And you’re new hate-do has me rolling my eyes.”

The new father also finds room for a surprisingly sweet lullabye. Toward the end of Panther Puss, Locke Ward implores the sleeper to “dream something sweet for me,” and promises “all of the sadness shall wash away.” Only a scary, electronic gong sound at the end undercuts the tenderness.

John Schlotfelt has made a chorizo meatloaf, the world will never be the same.