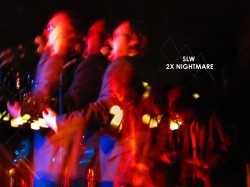 I was introduced to the insanity of “Big Lizard In My Backyard” by The Dead Milkmen sometime in the 80’s. The irreverent, usually scatological humor and unpolished performances on the album seemed to have dislodged the chromosome that would have prevented me from being able to enjoy the hometaping fruits of garages and bedrooms everywhere.

Prolific local music legend Samuel Locke Ward’s growing canon stems from the same orchard. In fact, one of his many projects includes work with Joe Jack Talcum of the Milkmen. Digging back through the mountain of Sam Locke Ward music available online is a bit daunting—it is obvious that his M.O. is his ability to quickly capture an idea to tape.

His newest album, Double Nightmare, is made up of recordings made between 2010 and 2012 in his basement. Notably during this same period he released at least ten other recordings under his various projects. Clocking in at 40 tracks and just under two hours this release is a sprawling, nearly epic work. Thanks to some great engineering and mastering, Double Nightmare is a remarkably even listen all the way through. That said, the album is recognizably the dementia of Locke Ward. We’re presented a wide variety of styles and sounds on the album—hazy psychedelia (“Whipper of Slaves”), New Wave synthpop (“Candy Shop,” “J.O.T.D.F”), Pixies-sounding guitar pop (“All Bad Things,” “Oh Swell Me”), amphetamine punk (“All I Dread About”), Surf Instrumental (“No Surf”), Flat Duo Jets Rockabilly (“Day Drunk”), Grindcore Metal (“I Choose Darkness”), Horror Punk (“Believe”)—all presented through his weirdo filter.

After a few failed attempts at listening to it all in one sitting, I found skipping around the album to be the most enjoyable way to consume it—the randomness lending new perspectives on the songs. For longtime fans, Double Nightmare is another in a growing stack of releases. For everyone else, I recommend this album as a gateway onto the steep precipice of Samuel Locke Ward’s catalog.