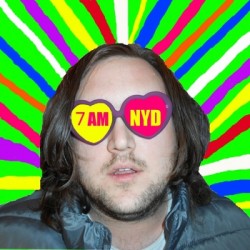 The normally prolific Samuel Locke Ward, no longer content with releasing two recordings per year, has embarked on an ambitious project: write, record and release an album each month for a year. On his first shot across the bow, 7 AM New Year’s Day, Locke Ward dedicates 10 new tracks to his interpretation of top-40-style electro pop.
Locke Ward can get pretty loose with his interpretations, 7 AM is at its strongest when Locke Ward sounds closest to the electro-pop tripe he’s trying to skewer. “It’s MP3” features the sort of undulating, low-end synth buzz that isn’t too far away from the more European-inspired electronic production that’s all over top-40 radio. It also comes complete with pulsating synth vamps and digitally altered vocals. “MP3” really benefits from the backing vocals of his wife, Grace Locke Ward. At first, her voice is pinched and phase-shifted for an almost ghostly cap to the verse, then during the bridge, her smokey call and response with her husband gives his music a rare sexual and alluring quality. “It’s MP3” is a Locke Ward career highlight.

Right on the heels of “MP3” comes the haunting “Dance Generic,” which boasts the talent of one of Locke Ward’s weirdo heros, R. Stevie Moore. “Dance Generic” doesn’t hue as closely to the electro-pop inspiration. 7 AM’s fourth cut is a little more of a circus sideshow take on electro-pop. Moore’s baritone punctuates every few bars of Locke Ward’s carnival barking with a creepy intonation, all served over wind-up-toy synth swirls and the key trills.
And let’s not forget Locke Ward’s take on hip-hop. Sucka MC Dr. Don and Professor Pooch (a.k.a. Miracles of God cohort Jason Hennessy) sling a verse apiece for “Pizza in the Club.” The beat is bit more golden era hip-hop, leaning on guitar-like synth stabs and spare beats, but it’s plenty to get your head bobbing and more than enough for the silky flow of Dr. Don and Professor Pooch. If Locke Ward keeps up this pace, 2013 should be a darn fine year.lls