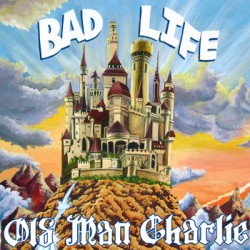 I say it every few months but it bears repeating: Iowa City has a collection of local musicians and bands that stands up against any other city in terms of quality, creativity and above all, good weird. In terms of the global music scene we’re ahead of the curve in some ways (Night-People Records?) and behind it in others (dub step got big here eight years too late?), but in the Yellow Ghetto, Black’s Gaslight Village and peeling farm houses outside town, there’s a lot going on.

I missed out on Old Man Charlie’s first record six years ago, but the Old Man (daytime name Arlen Lawson) seems to be doing okay without any validation from me. He writes folk songs that he delivers in resonant and furry baritone. He accompanies himself on guitar with more urgency and passion than precision, giving some tracks a lurching, stumbling momentum that it would be a shame to smooth out.

Speaking of Iowa City’s good weird, the Emilees (who just put out a great record) show up on a couple of tracks. Emalee Honeycutt’s cello haunts “All That We Got,” and Emily Hall trades verses with Arlen on “A Garden,” whose lyric is a series of questions: “If you ever knew the reason when the story took control would you think that only truth could move your tongue?”

Who is he asking? Are the questions rhetorical? Don’t know. Don’t know if all the references to pills and drugs are literal or metaphorical. ‘Truth’ comes up a lot as well, and maybe underlying the oblique narratives Arlen spins is his own curious back porch epistemology, wondering how we know what we know, whether we can trust our senses, if we can ever know anything for sure.

The clear, conversational melodies rescue the lyrics from being overly pretentious. The Björk-esque observation “We swam in a cloud of living things” (“Living Things”) has my favorite kind of profundity: an arresting idea stated clearly in small words. Some of the songs, like “Los Angeles,” feature electronic production from Iowa City electronic musician Machine Daydream and contrast nicely with the barer acoustic songs.

Some songs, like “Backwater Novelist, seem like demos that deserve a full-band treatment. But it’s a good song that sounds big even played small. The fact that the production stays intimate and bare is a valid choice, even if it was one of necessity. Calling it Bad Life is a tricky misdirection as it’s a lively, if disquietingly good time.