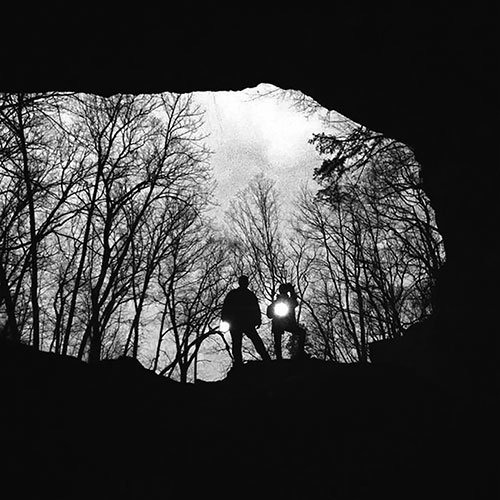 The album is split into Nora’s tracks, a collection of dizzying, kaleidoscopic yet gentle guitar and voice songs, Curt’s tracks, which take a very different direction — more overt and political recorded samples overlaid on circular-breathing saxophone pieces — and one final collaborative song. To be honest, it’s a weird combination, but the overwhelmingly cave-y sound of the cave acts as a binder, almost a third instrument, which somehow lifts these two bodies of work onto the same layer of reality.

Fans of Nora’s glimmering singer-songwriter style may find Curt’s more aggressively emotional and experimental pieces challenging. Likewise, noise heads and saxophone nerds may find Nora’s songwriting too soft, sweet and enjoyable. This disparity aside, 2% manages to feel like one whole thing, a collaboration between artists who understand one another’s work. It really does come across not as a split, but as an experimental collaborative album with a good deal of coherence, even as the artists are doing two completely different things.

Highlights include Nora’s track “Hour Glass,” which is hypnotic and lullaby-like, with some amazing structural, lyrical and technical prowess without being flashy. The reverb of the cave adds a moving affect to this song in particular. Curt’s track “Facebook Messenger,” the only one that doesn’t emphasize recorded samples, also levels-up thanks to the cave’s magical properties, and is incredibly moving and evocative without use of language.

The album will be released on vinyl by Washington, D.C.-based Bad Friend Records; you can catch both of these artists live, and pick up a copy of the record before they hit the road for a long tour, at release parties on August 4 at Rozz Tox in Rock Island or on August 5 at Trumpet Blossom in Iowa City.