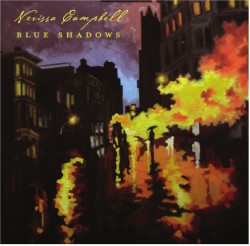 Nerissa Campbell is a Brooklyn NY Jazz singer and songwriter. Her connection to Iowa (LV tries to stay local, y’know) is through her husband, who’s from here; they come to Iowa frequently, and she’s played memorable shows in Iowa City, most recently at the Mill. Her music isn’t purely Jazz, which values improvisation on a standard songbook over original songwriting. She does sing with an accomplished trio of Jazz musicians on Blue Shadows, but the focus is on Cambell’s singing. She sings in a way that is focused on the songs. Her clear alto voice, with only occasional hints of vibrato brings subtle nuances of dynamics and timbre to her songs, always in service to the lyric. Most singers learn a song well enough to perform it competently while making a grocery list in their heads, but Campbell like a good actor, stays in the moment.

Lyrically, Cambell hews close to the precarious, ambiguous point between being in love and falling out of it. She romanticizes the big city after dark: “Down Canal Street, the landscape suddenly capsized, swallowed by black and white.” she sings in “Down Canal.” But in “Powder Burn” she sings “was I having a little fun, or was the fun having me?” You can get caught up in the late night jazz club ambience, but there’s always some hint of lost love and loneliness lurking around the corner.

She sings about love almost exclusively in its absence and the New York City streets she sings about are deserted and poorly lit. The title track, “Blue Shadows” stretches out to over eight minutes, with Matthew Jodrell’s quiet piano recalling Bill Evans and Vince Guaraldi, outlining a chord progression with some of Radiohead’s modal wistfulness. Nerissa Campbell explores a tricky, dark emotional landscape, lit with fleeting flashes of joy. Having met her, it’s surprising to me how this sunny, blonde Australian woman’s imagination takes her to the places Blue Shaodws goes. But that’s imagination for you—when it’s working, no telling where it will end up.

Kent Williams cares a lot about Transformers because there is more than meets the eye.