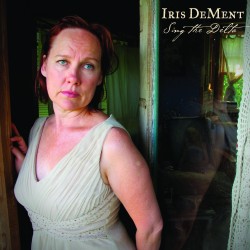 Iris DeMent put 16 years between her new album, Sing the Delta, and her previous album of original music. She quickly gained critical acclaim (and one Grammy nomination) for her first three albums and while she stayed busy performing and sporadically recording with others and delivering an album of gospel songs titled Lifeline in 2004, the inspiration to write lay dormant. In an interview with americansongwriter.com, Iris said “I don’t know why I started writing in the first place. I really don’t… I made myself available but the deal just wasn’t ready, wasn’t there. I finally made peace with that. It took me a long time, but I finally have fully accepted I’m not in charge of that. I always knew the songs would come. I just let it come in its own time.”

The inspiration, when it finally came, delivered a traditional country folk and gospel-influenced photo album of memories. Grainy snapshots of her childhood revealed in lines like “I was layin’ on my belly on the livingroom floor / I was watchin’ Howdy-Doody so I’m guessing it was right around four” from the heart-wrenching loss of faith confessional “The Night I Learned Not To Pray” and “I miss those Labor Day picnics like the ones we used to have / No one’s worried about nothin’, no one’s feelin’ bad / I wanna roll down the hillside and lay dizzy in the cool green grass / jump around like a frog in a gunny sack” from “Livin’ on the Inside.”

Iris says that she let Sing the Delta come in its own time. This slow-cooked approach coupled with the light guiding hand of producer Bo Ramsey reveals a heartfelt devotional Protestant gospel essence that Iris grew up with. With passionate delivery, It is a natural vocabulary for her to use to tell her stories—stories I hope we don’t have to wait as long to hear again.