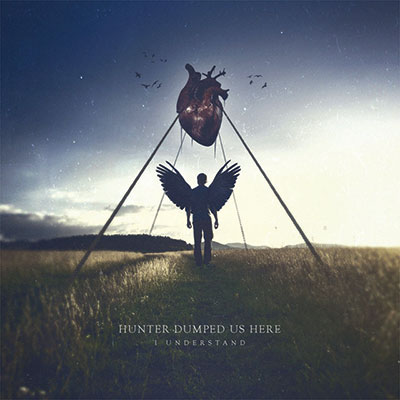 The members of the band Hunter Dumped Us Here may hail from Cedar Rapids, but they have musical ideas and ambitions that extend well beyond the city limits. They may be firmly in the camp of drums-and-wires rock and roll, but one cannot deny their intensity and musical chops. The word that comes most to mind listening to I Understand is bombast. As in, the broad stadium-filling sound of Queen, or the operatic bathos of Muse.

On first listen, I found Gabe Reasoner’s vocals off-putting, reminding me of Fall Out Boy’s over-the-top emoting. But that’s a first impression. He has range and depth, and when he goes into his hyper-enunciated throat-straining Emo voice, it’s done with irony and humor. Taken as a whole — along with his wordy, self-referential lyrics — he’s a lot closer to the oddball intensity of Future Islands’ Sam Herring. The song “Cavendish” showcases how too much is never enough for him: Its word count exceeds that of this review! “I had written a poem to go here before but was left wanting more like a door that leads to a room aforementioned of which you inhabited …” and it goes on and on from there.

In the moment, hearing him sing, plead and recite this, it has the feeling of an overwrought Freshman Comp essay, but the energy and conviction and hyper-emotionality of Reasoner’s delivery turns it into parody, homage and something like all of The Catcher In The Rye packed into a 5 minute rock song. Guitarist Preston West, who sings lead on “No Good Men,” has a more straightforward vocal style, which fits the song. Singing lines like “I am the object of a pervert’s desire,” his sincerity keeps it from being a joke (though it’s still kind of funny).

The band’s performance matches the intensity of the singing. West’s guitar provides a wide palette of sound, his favorite being chunky sustained chords that swamp the stereo field. Reasoner’s piano blends well with the guitar, propelled always by Jason Feight’s hectic drumming. Hunter Dumped Us Here sing and play as though their lives depend on it, as though chased by demons. Reasoner sings, “Life is like a bullet lodged deep into my skin / Only God can dislodge it but I’m still waiting on Him.” I’m tempted to tell him to calm down; still, his hysteria is perfectly entertaining.