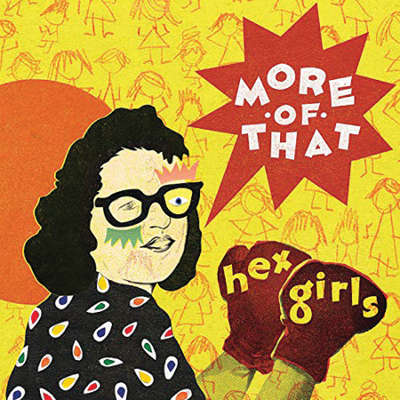 Listening to the debut album from Cedar Falls band Hex Girls, I’m reminded of the time before punk broke in the ’70s. Bands like the Dead Boys and Johnny Thunders’ band the Heartbreakers took ’60s garage rock and psychedelia mixed in attitude and energy (and speed and alcohol) and spilled it on the dirty stages of New York.

Hex Girls is similarly a band that has a lot to get off its chest: Life is sometimes a bummer and sometimes gets on your nerves, and the best way to deal is with sneers and guitars.

The current incarnation of Hex Girls formed in 2017, when drummer Ross Klemz joined brothers John and Nick Fisher and Charlie Patterson. That’s the lineup for the band’s debut, More of That. The album has a unique sound, but one that is grounded in classic rock and punk. It’s an edgy, nervous and anthemic blend with bits of glam, no wave and vintage rock with a fair share of disaffected punk attitude.

The opening salvo, “God Can’t Count,” is a driving attack with searing guitars that sets the tone for the album. The narrator realizes he can’t use counting to calm down from offenses levied upon him. “Lurid skies, hypnotize, tellin’ your lies — your fuckin’ lies,” begets the chorus. “What can I do? / I’ve got to think it through, yeah / I can’t count to infinity — oh!”

The stabbing guitar chords and chugging rhythm of “City of Rain” recall mid-’70s Some Girls Stones. The dark and ominous lonely rap owes a bit to “Shattered.” “I wander ’round this barren town / can’t seem to find what’s on my mind / and there’s nothing left there’s nothing left / synthetic words, synthetic sounds synthetic faces all around / in that city of rain.”

More of That is made up of the building blocks of truly great rock — strong rhythm and guitars and lots of attitude recalling that nascent Manhattan music scene in bars like CBGB’s and Max’s Kansas City. Hex Girls delivers it like a fresh slice of New York pie: hot and spicy with a little grease. No matter how it’s folded, it sticks with you.

This article was originally published in Little Village issue 259.