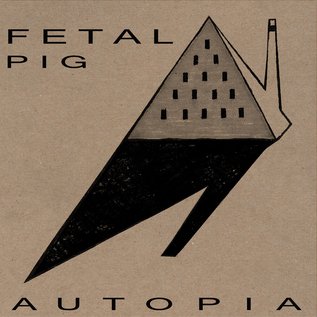 Jesus said “Behold the lilies of the field. They toil not, neither do they spin.” For some reason Fetal Pig reminds me of Jesus’ lilies. With a band history going back nearly 20 years, these guys do what they do not because it makes them rich and famous–because it hasn’t–but because their music is what makes their day jobs and responsibilities worthwhile. Musically they’re in the no man’s land between prog-metal and punk, with a nod to odd influences like Devo and the Dead Kennedies.

The songs are angular, stabbing and sometimes atonal, with vocals shouted and declaimed rather than sung. The lyrics (and the pyramid of the cover art) hint at more than a passing familiarity with Robert Anton Wilson’s Illuminati books. They also have an operatic bleakness “Leave me alone I’m screaming/Can’t you see I’m dreaming?/Living a lie, the truth is dying/Peace and love, there’s no use trying.”

Stuff like “Forget your name, learn your number” doesn’t sound like much fun, but the spirited way they attack the song’s riffs is at odds with the gloomy message. It’s as though they bash out these songs and rip up their vocal chords in order to free themselves from the societal horrors they take as their subject. The keywords they use to describe themselves on their Bandcamp page–conspiracy dissonance dystopian monsters paranoia prog-punksarcasm Des Moines–leave out one thing: fun. With a name like Fetal Pig it has to be fun, and it is.