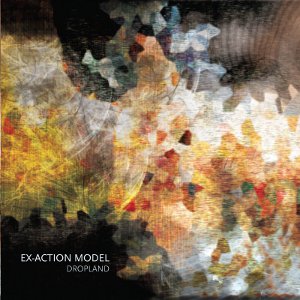 Brendan Hanks’ full-length debut under his long-running nom-de-plume, Ex-Action Model, is a testament to the years Hanks has spent perfecting his programing and sequencing abilities. Dropland is a diverse collection of electronic pieces that manages to cram a wide variety of sounds and textures over the run of the album without feeling schizophrenic and fractured. Hanks manages this feat through complex melodies and counter melodies and impeccably produced rhythms; there’s an almost orchestral quality to the depth and breadth of the arrangements.

Maybe the most obvious example of Hanks’ compositional abilities is “Years.” The track plays out like an experimental chamber orchestra piece. “Years” feels small without being compact; there’s an organized confusion to the piece, noises fluttering about, as though Hanks is just warming up and tuning his keyboards and synthesizers before a performance. However, as the track progresses, a warm, conversational structure emerges from the echoing confusion, as the circling, chaotic elements begin prompting and responding, creating a serene, harmonious conclusion.

Hanks gives equal attention to the haunting interlude, “Drifts.” The ebbing and flowing notes of what could have been a short stop-gap of a piece provide an unnerving, moody break following two of the albums more propulsive tracks. The electronic flits, scrapes and wobbles on “Drifts” give the billowing keyboard drones an almost teeth-gritting sense of danger, the most frightening trip to the chill out tent imaginable.

But highlighting two of the more understated pieces on Dropland would be a disservice to the smart, dense, playful and upbeat cuts which comprise the bulk of the 36-minute album. Tracks like “Nightfall,” “In a Foreign City” and “Don’t Panic” build lush soundscapes on strong, pulsing beats and nimble, darting melodic lines, yet each have distinct personalities and atmospheres