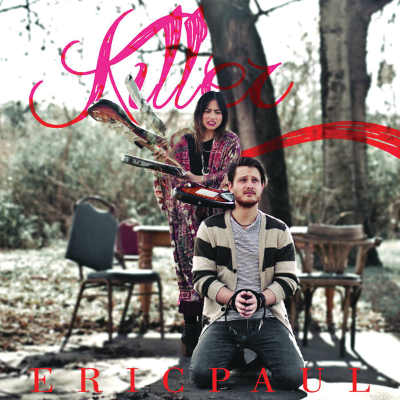 The first thing I notice about Eric Paul’s Killer EP is guitar tone. In particular, the opening track, “Paradise of Sin,” has a wide stereo guitar sound, subtly overdriven. It’s the kind of electrified guitar sound that gives you that warm feeling when you hear it at concert volume, combined with the punchy drums that bob and weave around the guitar parts.

It’s customary in a music review to comment on the lyrics, but the raw sound of his playing and singing distract from considering Killer as a vehicle for words. I’m sure Paul put work into them, but dynamics, harmonic sophistication and tone are the important things here. His songs are built around his guitar, which stays pretty close to a few carefully chosen tones without ever getting monotonous.

Paul’s singing has considerable range. He deftly shifts between his chest and head voice, using a nasal edge and a vibrato to vary texture. There’s a bit of Les Claypool in his voice, and some of Conor Oberst’s distressed, unmade-bed sound. But Paul isn’t arch and jokey, like Claypool, or as earnest as Oberst. Although on many of the tracks his vocal gymnastics feel overwrought, he has no trouble achieving lift-off on the song “Killer,” where his vibrato takes on a wired, wild quality that fits the propulsive and hectic beat.

The attention to sonic detail in these songs approaches that of Steely Dan. But where Steely Dan’s high-gloss finish is both ear candy and a cynical comment on the emptiness of commercial pop music, Paul is sincerely pursuing perfect sound for its own sake. Could sound itself be the meaning of Killer? I don’t know if that’s what Eric Paul intended, but it’s what he’s achieved, and on those terms it’s very good.