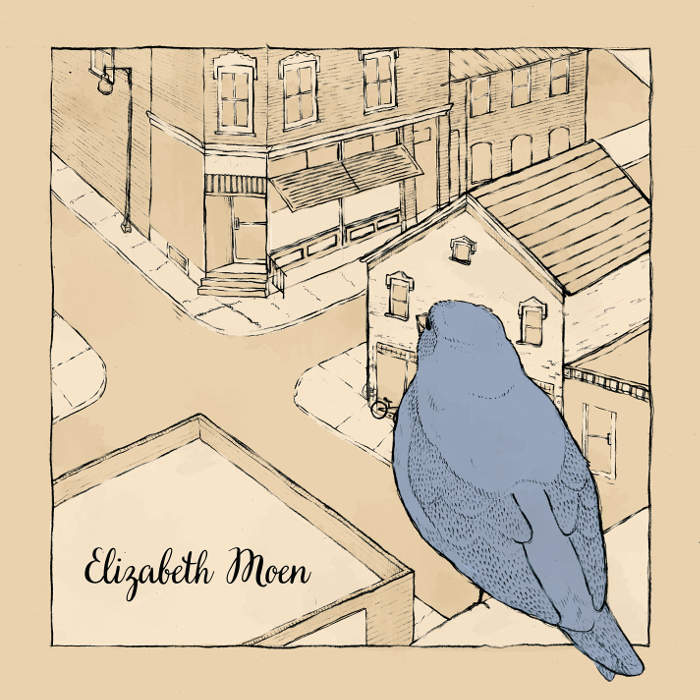 On “Songbird,” the first track from her eponymous debut album, Elizabeth Moen sings, “Singing at the top of my lungs trying to get through.” It shows off her voice and guitar in a way that perfectly situates her in the singer-songwriter tradition alongside Joni Mitchell, Janis Ian and Judee Sill. Her clear alto voice covers a wide dynamic range, sometimes within a single word, and the subtlest of vibratos kisses every sustained syllable.

The eight songs of this record are, remarkably, nearly Moen’s entire songwriting output, and most were written between reserving time at Flat Black Studio and showing up to record them. A musician’s history should be tangential to their music output, but the rush of how these songs were written is there in the music.

Obviously Moen has been singing and playing guitar for some time, but this initial burst of “I can do this!” creativity is remarkable for being so good so quickly. Prior to recording, she’d never played with a band, but she sounds like she’s been doing it forever.

On “Lyin’ Here,” Moen uses the kind of dancing melisma that is a cliché of R&B on the verse, but in such an offhand, quiet way that it becomes something else. It contrasts well with the brassy unadorned tone of the chorus. “Lost It” tells a story of a breakup between two people that makes them both come undone: “Last time we spoke you were playing New York City. Next day you took the subway without your phone and disappeared for days.” The spare, matter-of-fact language artfully conflates love lost with losing one’s mind; it’s like a Raymond Carver story pared down to almost nothing and given a melody.

As a local artist, one can’t get more local and specific than writing a song titled “312 East Market St,” the address of George’s Buffet. “I’m watching people sit in the places and they don’t even got a clue, where they’re making the same jokes and singing along to the same songs we listened to.” Elizabeth Moen may be new to this songwriting thing, but she is what the old hippies at the bar in George’s would call an old soul. This is a remarkable first album, that seems to have come — as the best things sometimes do — out of nowhere.